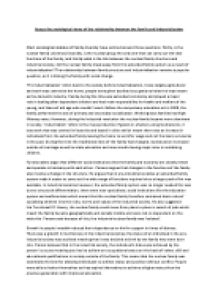 ﻿Assess the sociological views of the relationship between the family and industrialisation Most sociological debates of family diversity have centred around three questions. Firstly, is the nuclear family universal, Secondly, is the nuclear group the only one that can carry out the vital functions of the family, and thirdly what is the link between the nuclear family structure and industrial society, did the nuclear family break away from this extended family system as a result of industrialization? The relationship between family structure and industrialisation remains a popular question, as it is linking the family with social change. ?Pre Industrialisation? refers back to the society before industrialisation, it was largely agricultural and work was centred at the home, people were given ascribed occupational roles this was known as the domestic industry. Family during the time was extended commonly and played a major role in looking after dependent children and had main responsibility for health and welfare of the young, and those of old age who couldn?t work. ...read more.

Parsons said because of this, the industrial nuclear family was ?isolated?. Growth in people?s wealth reduced their dependence on kin for support in times of distress. There was a growth in meritocracy in the industrial societies; the status of an individual in the pre-industrial society was ascribed meaning that it was decided at birth by the family they were born into. Parson believed that in the industrial society, the individual?s status was achieved by the person?s success meaning you had to achieve an occupational status on the basis of talent, skill and educational qualifications in society outside of the family. This means that the nuclear family was essentially the best for allowing individuals to achieve status and position without conflict. People were able to better themselves as they aspired themselves to achieve a higher status then the previous generation with improved education. Parsons also believed specialised roles had developed through the nuclear family. Men carried an ?instrumental role? and women were the ?expressive leaders? in the family, he thought this came about as it was more effective for society. ...read more.

Individuals left home to work and women staged at home and had strong extended kinship networks. Then the third stage was family was based on consumption not production, the family were buying things rather than making them. The nuclear family they found was focused on its lifestyles and personal relationships, this was called ?the symmetrical family? the husband and wife had joint roles. Young and Willmott found improved living standards for example washing machines instead of hand washing, the decline of the close-knit extended family, improved status of women, and weaker gender identities (where women could do what men could do whereas before women weren?t expected to do much) lead to families becoming equal. Young and Willmott?s could be criticised by conflict theorists for not addressing the negative aspects of changes, as their theory seems to suggest that family life gets better. Feminists criticise their view on the division of labour, as they believe it?s inaccurate to talk about a symmetrical family, because it implies that men and women now do the same jobs, which is not the case for Radical feminists, women are ?takers of s**t? because men benefit from women?s unpaid domestic labour. ...read more.

This essay starts well and has a good description of Parsons' views and some excellent counterarguments. However, the essay ignores other Functionalist theorists, Marxist theory and distinctly lacks any overall conclusions and evaluations.