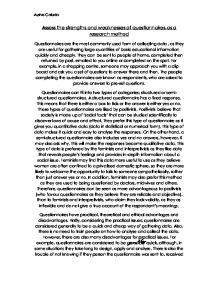 Assess the strengths and weaknesses of questionnaires, as a research method

Assess the strengths and weaknesses of questionnaires, as a research method Questionnaires are the most commonly used form of collecting data, as they are useful for gathering large quantities of basic educational information quickly and cheaply. They can be sent to people at home, completed then returned by post, emailed to you online or completed on the spot. For example, in a shopping centre, someone may approach you with a clip board and ask you a set of questions to answer there and then. The people completing the questionnaires are known as respondents, who are asked to provide answers to pre-set questions. Questionnaires can fit into two types of categories; structured or semi-structured questionnaires. A structured questionnaire has a fixed response. This means that there is either a box to tick or the answer is either yes or no. These types of questionnaires are liked by positivists. Positivists believe that society is made up of 'social facts' that can be studied scientifically to discover laws of cause and effect. They prefer this type of questionnaire as it gives you quantitative data (data in statistical or numerical form). ...read more.

Additionally, the theoretical issues also have two sides. Positivists prefer using questionnaires are they are easy to categorise. Although, the common mistake of asking too many questions should be avoided as they will lead to the respondent, giving up half way through or not completing it altogether. On the other hand, interpretivists believe that questionnaires lack validity as asking a question with a only a yes or no answer, does not produce a true or genuine picture of what somebody really thinks or believes. This does not let the researcher get close to the respondents meaning or feelings. This is why interpretivists prefer semi-structured questionnaires, as they can then ask why, following the question. However, open-ended questions, such as 'why' questions, can take a long time to analyse and collect data from. Moreover, we also need to look at the advantages and disadvantages of ethical issues, relating to questionnaires. Ethical issues refer to the moral issues of right and wrong. Questionnaires need to make sure they follow the following principles, set by the British Sociological Association about ethics. ...read more.

For example, sending out a million questionnaires will give you a bigger range of information and will make it easy to generalise; rather than, interviewing a million people, which is time-consuming and could take years. Also, it would be hard to categorise how the people feel, as many people might say different things or not relate to one another. Furthermore, questionnaires are also good in the education system, as if a child is getting bullied and is afraid to say, then an anonymous questionnaire might let them speak out about how they feel. Questionnaire response rates can often be higher in schools, than in other areas because once the head teacher has given their consent and put their authority behind the research, then teachers and pupils may be under pressure to cooperate. In conclusion, sociologists believe questionnaires are useful to obtain a large amount of opinion, quickly and cheaply. Although, if they want to understand more about a particular topic or understand the meaning and feelings of the participants, with a more in-depth, informative response, then they will use interviews or participant observation, to involve themselves in the research and to be able to have a full conversation, face-to-face, with the participant themselves. ?? ?? ?? ?? Ayshe Caluda ...read more.