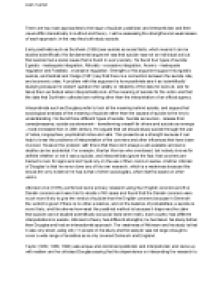 Assess the Usefulness of Different Sociological Approaches to Suicide.

﻿Liam Curran There are two main approaches to the issue of suicide; positivism and interpretivism and their views differ dramatically in method and theory. I will be assessing the strengths and weaknesses of each approach, in the way they both study suicide. Early positivists such as Durkheim (1895) see suicide as social facts, which means it can be studied scientifically.His fundamental argument was that suicide was not an individual act but that suicide had a social cause that is found in every society. He found four types of suicide: Egoistic - inadequate integration, Altruistic - excessive integration, Anomic - inadequate regulation and Fatalistic - excessive regulation. Strengths of his argument support his egoistic suicide, as Marshall and Hodge (1981) say that there is a connection between the suicide rate, and economic crisis. A problem with this argument is how positivists see it as ?scientifically? studying because he doesn?t question the validity or reliability of the data he looks at, and he takes them as factual when interpretivists look at ...read more.

For example, Marilyn Monroe who overdosed, but nobody knows for definite whether or not it was a suicide, and interpretivists ignore the fact, that coroners are trained to look for signs and don?t just rely on the use of their common sense. Another criticism of Douglas? is that he never done any of his own research, which is a weakness because this shows the only evidence he has is that of other sociologists, which itself is based on other works. Atkinson et al (1978), performed some primary research using four English coroners and five Danish coroners and were told to decide of 40 cases and found that the Danish coroners were much more likely to give the verdict of suicide than the English coroners because in Denmark the verdict is given if there is no other evidence, and on the balance of probabilities, a suicide is more likely, and this shows how weak the positivist method is because it disproves the claim that suicide can be studied scientifically as social facts when really, each country has different interpretations to suicide. ...read more.

His own study of 12 months found 32 cases of people throwing themselves under a train and found that 32 were suicide, 5 were accidental and 10 were open verdicts. A strength of Taylor?s theory is that he combines both approaches to suicide and uses a mix of different methods, involving scientific and interpretive methods, which improved the validity of the results. However, reliability is an issue because there are very little realist approaches to suicide and interpretation is still different, even if combined with scientific methods. Also Taylor uses cases from people under trains which doesn?t show a broad scale of the way people were feeling which can often determine how they commit suicide, which then gives the meaning of the suicide. Overall, interpretivist approaches are more useful in studying suicide because today there are many different societies and can adapt to the meaning of suicide as opposed to positivist approaches to suicide that struggles to adapt to the world we live in today, through the use of scientific methods to discover social facts that, over time can change. ...read more.