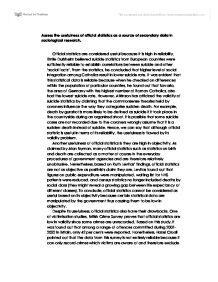 Assess the usefulness of official statistics as a source of secondary data in sociological research.

Assess the usefulness of official statistics as a source of secondary data in sociological research. Official statistics are considered useful because it is high in reliability. Emile Durkheim believed suicide statistics from European countries were sufficiently reliable to establish correlations between suicide and other 'social facts'. From the statistics, he concluded that higher level of social integration among Catholics result in lower suicide rate. It was evident that this statistical data is reliable because when he checked on differences within the population of particular countries, he found out that Bavaria, the area of Germany with the highest number of Roman Catholics, also had the lowest suicide rate. ...read more.

Hence, we can say that although official statistic is useful in terms of its reliability, the usefulness is flawed by its validity problem. Another usefulness of official statistics is they are high in objectivity. As claimed by Alan Bryman, many official statistics such as statistics on birth and death are collected as a matter of course in the everyday procedures of government agencies and are therefore relatively unobtrusive. Nevertheless, based on Ruth Levitas' findings, official statistics are not as objective as positivists claim they are. Levitas found out that figures on public expenditure were manipulated, waiting list for NHS patients were reduced, and census statistics no longer included deaths by social class (they might reveal a growing gap between life expectancy of different classes). ...read more.

Based on this study, it was found out that among a range of offences committed during 2001-2002 in Britain, only 42 per cents were reported. Nonetheless, Hazel Croall pointed out that the data from this survey is not entirely reliable because it can only record crimes which victims are aware of and therefore exclude many crimes. Furthermore, the early Crime Surveys only interviewed people over 16 and therefore omitted most crimes committed against younger age groups. We can deduce then that it is not entirely acceptable that official statistics are low in validity based on the British Crime Survey because the validity of the data from the survey itself is doubted. In sum, official statistics are useful based on their reliability and objectivity but their validity is somehow doubted. ...read more.