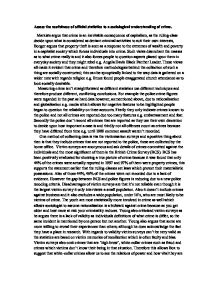 Assess the usefulness of official statistics to a sociological understanding of crime.

Assess the usefulness of official statistics to a sociological understanding of crime. Marxists argue that crime is an inevitable consequence of capitalism, as the ruling-class decide upon what is considered as deviant criminal activities to suit their own interests, Bonger argues that property theft is seen as a response to the extremes of wealth and poverty in a capitalist society which forces individuals into crime. Such views disenchant the masses as to what crime really is and it also forces people to question aspects placed upon them in everyday society and they might rebel e.g. Angela Davis Black Panther Leader. These views all make it evident that crime and therefore methodologies behind the collection of such a thing are socially constructed; this can be synoptically linked to the way data is gathered on a wider note with regards religion e.g. Bruce found people exaggerated church attendance as to look socially desirable. Measuring crime isn't straightforward as different statistics use different techniques and therefore produce different, conflicting conclusions. For example the police crime figures were regarded in the past as hard data however, as mentioned above, due to rationalisation and globalisation e.g. media which allows for negative features to be highlighted people began to question the reliability on three accounts. Firstly they only indicate crimes known to the police and not all crimes are reported due too many features e.g. ...read more.

Victim surveys also omit crimes that are 'high-brow', white-collar crimes such as fraud and crimes which victims don't know their being in that situation. Therefore this allows Box to suggest that white-collar crimes allow us to see the relations of power and how vital they are in shaping the perception of crime and how the elite have the ability to avoid criminalisation through having high levels of social capital and being able to negotiate justice. Also BCS is a typical cross-sectional survey therefore it contains some errors e.g. doesn't provide detailed information about particular places i.e. some areas of crime are over focused. Also methodologies behind official statistics are influenced greatly by the media and its sensitisation as they are dependent upon the populations' awareness of their victimisation. This is because in a media saturated society people are dependent upon tings such as the media to tell them all about aspects of contemporary life, and the media through its ability to amplify situations illustrates and heightens sensitivity towards certain forms of behaviour. Another method of collecting data on crime is via self-report studies which shine a light on the dark figure of crime. Self-report studies ask respondents to reveal crimes they have committed and for obvious reasons this has been criticised for lacking in validity as respondents may lie or exaggerate even if they don't mean to mislead they may simply be mistaken e.g. ...read more.

This stark difference between the levels of crime and fear of crime has been attributed to the way crime is portrayed and reported in the media and how the tabloid papers place an extra emphasis on particular headlines to grab readers' attention. Fletcher and Allen identify some factors which affect the fear of crime: locality, age, gender, perception disorder and wealth. Ironically Pantaza and Gordan found that the poor, who are criminalised and seen as the typical criminal, are most likely to fear crime as the consequences of crime is more severe for people in materially deprived areas. Official statistics have been criticised for introducing a systematic bias into the study of crime e.g. Streeter and the selective law enforcement, stigmatising the lower-class ethnic males in the inner-city and ignoring the huge amounts of white-collar crimes which cost 5 times more than blue-collar crime (Karestdet and Farrell). However on the other hand official statistics provide a readymade resource for sociologists interested in crime, although a negative feature would be that social construction of such data means that they don't describe the real rate of crime and can lead to a fear of crime that is undetected to an individual. Although a positive evaluation would be that official statistics show sufficient regulations and patterns across time to demonstrate something about the extent of reported crime; not just a snap-shot. They are also used as a guide for the formation of social policies in relation to crime by governments and social control agencies. ...read more.