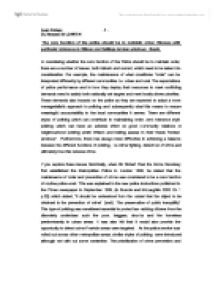 Assess the usefulness of participant observation as a sociological methods

The core function of the police should be to maintain order. Discuss with particular reference to Wilson and Kellings broken windows thesis In considering whether the core function of the Police should be to maintain order, there are a number of issues, both historic and current, which need to be taken into consideration. For example, the maintenance of what constitutes "order" can be interpreted differently by different communities i.e. urban and rural. The expectations of police performance and in how they deploy their resources to meet conflicting demands need to satisfy both nationally set targets and meet locally driven priorities. These demands also impacts on the police as they are expected to adopt a more managerialistic approach to policing and subsequently what this means to ensure meaningful accountability to the local communities it serves. There are different styles of policing which can contribute to maintaining order, zero tolerance style policing which can have an adverse effect on good community relations or neighbourhood policing which Wilson and Kelling assess in their thesis "broken windows". Furthermore, there has always been difficulties in achieving a balance between the different functions of policing , i.e crime fighting, detection of crime and ultimately how this reduces crime. If you explore these issues historically, when Sir Robert Peel the Home Secretary first established the Metropolitan Police in London 1829, he stated that the maintenance of order and prevention of crime was considered to be a core function of routine police work. ...read more.

There are many other many other examples that could have been used to describe this situation such as in Brixton and Burnley in the 1980s in the UK where communities ended up rioting. This was due in the main to the way policing functions were carried out as noted by Lord Scarman in his inquiry into the cause of the riots. However it took the murder of Stephen Lawrence in 1993 and the following inquiry by Mc Phearson which found the police to be "institutionally r****t" and legitimised the strong views from black and ethnic minority communities about the lack of trust and confidence in the police. Many of Mc Phearson's recommendations were aimed at changing the way in which the police interacted with communities which was deemed to be essential in achieving consensus about the way a neighbourhood was policed. Furthermore it is not just a necessary function of the police but also a statutory part of the police governance arrangements. They are obliged to listen and consult members of communities when setting their strategic priorities through the Police Authorities, which are in part made up by democratically elected members, and representatives from magistrates. Whilst in the early days of policing it would have been white, middle classes who held the power and could be influential in determining police priorities, today the police find themselves, in some areas, consulting and listening to communities, which could be ethnically and culturally very different to the predominantly white male workforce. ...read more.