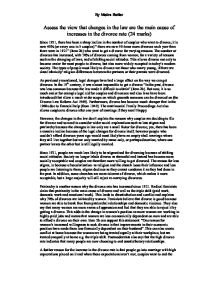 Assess the view that changes in the law are the main cause of increases in the divorce rate (24 marks) Since 1921, there has been a sharp incline in the number of couples who want to divorce; it is now 40% (or every one in 5 couples) " there are now 50 times more divorces each year than there were in 1921" (Item 2b) who want to get a divorce for varying reasons. The number or divorces has increased, with 70% of divorces coming from women, for a variety of reasons such as the changing of laws, and of shifting social attitudes. This allows divorce not only to become easier for most people to divorce, but also more widely accepted in today's modern society. The types of people most likely to divorce are those who marry young, if there are class/ ethnicity/ religion differences between the partners or their parents were divorced. ...read more.

itself, however people who couldn't afford divorces years ago would most likely have an empty shell marriage where they still live together but are only married by name only, or perhaps desertion; where one partner leaves the other but is still legally married. Since 1921, people are much less likely to be stigmatised for divorcing because of shifting social attitudes. Society no longer labels divorce as shameful and instead has become more socially acceptable and couples are therefore more willing to get divorced. The reason for less stigma, is because of secularisation- as religion and the church loose their influence and less people are listening to them, stigma declines as they cannot condemn it as they had done in the past. In addition, some churches are more tolerant of divorce, which makes it more acceptable, but a large majority will still reject re-marrying divorcees. Patriarchy is another reason why the divorce rate has increased since 1921. ...read more.

Postmodernists also say that the high divorce rate indicates that many people are now choosing to end unsatisfactory relationships. A further reason for the increase in the divorce rate is that people go into marriage with high expectations placed on it and when these expectations aren't met, couples want to end the marriage. The functionalists explain this as the 'ideology of love' that marriage should only be based of love and so when the love dies, there is no reason to remain together. Parsons and Fletcher also argue that the reason for a higher divorce rate is because couples (mainly women) will expect and demand more in their relationships today then perhaps their parents and grandparents. To conclude, there is no single reason for the increase in the divorce rate, although it may be a reflection that it is a reflection of post-modern society, where people feel that they have more choice and freedom to end an unsatisfactory marriage. ?? ?? ?? ?? By Moira Butler ...read more.