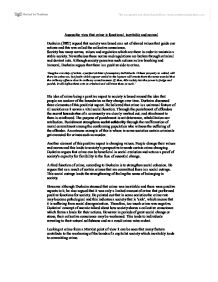 Durkeim (1982) argued that society was based on a set of shared values that guide our actions and this was called the collective conscience.

Society has many norms, values and regulation which are there in order to maintain a stable society. Nevertheless these norms and regulations are broken through criminal and deviant acts. Although society perceives such actions as law breaking and immoral, Durkeim argues that there is a positive side to crime.

‘Imagine a society of saints, a perfect cloister of exemplary individuals. Crimes properly so called, will there be unknown; but faults which appear venial to the layman will create there the same scandal that the ordinary offence does in ordinary consciousness. If, then, this society has the power to judge and punish, it will define these acts as criminal and will treat them as such.’

His idea of crime being a positive aspect to society is based around the idea that people are unclear of the boundaries as they change over time. Durkeim discussed three elements of this positivist aspect. He believed that crime is a universal feature of all societies as it serves a vital social function. Through the punishment of offenders the moral boundaries of a community are clearly marked out, and attachment to them is reinforced. The purpose of punishment is not deterrence, rehabilitation nor retribution. Punishment strengthens social solidarity through the reaffirmation of moral commitment among the conforming population who witness the suffering of the offender. An extreme example of this is where in some societies certain criminals get executed for crimes such as murder.

Another element of this positive aspect is changing values. People change their values and norms and this leads to society’s perspective towards certain crime changing. Durkeim argues that crime can be beneficial in social evolution and acts as a proof of society's capacity for flexibility in the face of essential change.

A third function of crime, according to Durkeim is to strengthen social cohesion. He argues that as a result of certain crimes that are committed there is a social outrage. This social outrage leads the strengthening of feeling the sense of belonging in society.

However although Durkeim stressed that crime was inevitable and there were positive aspects to it, he also argued that it was only a limited amount of crime that performed positive functions for society. He pointed out that in some societies the crime rate may become pathological and this indicates a society that is ‘sick’, which means that it is suffering from social disorganization. Therefore, too much crime was negative. Durkeim’ concept of anomie talked about how society shares a collective conscience which forms a basis for their actions. However in periods of great social change or stress, their collective conscience may be weakened. This leads to individuals reverting to their natural selfishness and as a result crime rates rocket.

Looking at crime from a Marxist point of view it can be seen that many factors contribute to the weakening of the bonds of a capitalist society which inevitably leads to committing crime.

Steven Box (1983) argues that many criminals get away with crime. In this case the same crime is likely to get repeated. An example of this factor is white-collar crime because a majority of white-collar crime goes undiscovered. Serious crimes, for example bank robbery, takes a lot of planning and skills so most people resort to committing minor anti-social crimes as a spur of the moment thing.

Box argues that control theory can be applied from a left wing perspective.  For Marxists, social control operates for the benefit of the ruling class and once this is weakened, it is possible that the people will turn to crime to express their disillusionment with capitalism.