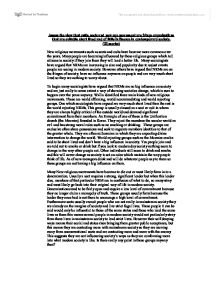 Assess the view that cults, sects and new age movement are fringe organisations that are evitable short lived and of little influence in contemporary society.

Assess the view that cults, sects and new age movement are fringe organisations that are evitable short lived and of little influence in contemporary society. (33 marks) New religious movements such as sects and cults have become more common over the years. Many people are becoming influenced by these religious groups which tell citizens in society if they join them they will lead a better life. Many sociologists have argued that NRMs are increasing in size and popularity due to unjust events people are seeing in modern society. However others have argued that NRMs are on the fringes of society, have no influence anymore on people and are very much short lived so they are nothing to worry about. To begin many sociologists have argued that NRMs are no big influence on society and are just really to some extent a way of showing societies change, which is sure to happen over the years anyway. Wallis identified three main kinds of new religious movements. These are world affirming, world accommodating and world rejecting groups. One which sociologists have argued are very much short lived than the rest is the world rejecting NRMs. This group is usually classed as a sect or cult in whom they are always highly critical of the outside world and demand significant commitment from their members. An Example of one of these is the Unification church (the Moonies) founded in Korea. They reject the mundane the secular world as evil and has strong moral rules such as no smoking or drinking. These groups are exclusive often share possessions and seek to regulate members identities to that of the greater whole. They are often millenarian in which they are expecting divine intervention to change the world. World rejecting groups such as the Moonies can be said to be short lived and don't have a big influence in society. Yes people join and are told not to smoke or drink but if you look to modern day society nothing seem to change in the way other people act. ...read more.

Women can therefore lead there own life and achieve own goals without being repressed down anymore. Also the decline in the extended family has helped to the growth of NRMs. Families in modern society are more diverse meaning the traditional extended family in the past is dying out. An extended family allows for people to be more social and have more of a community around them. But with the increase of the lone parent family this social community is not there to fall back on. This in many cases makes a small family such as a lone parent to want to join a NRM as they can get more of a family and friends to fall back on in times of need which sources in traditional society do not offer. Moreover Weber pointed out how those marginalized by society may find status and legitimizing explanation for their situation through a theodicy that offers ultimate salvation. This can explain why many people join world rejecting sects. While it has been argued that world rejecting sects are not increasing many of the less educated and 'school dropout's have become to join these NRMs for a new acceptance in life. To add to this world affirming groups are on the increase due to there appeal to those who are likely to have finished education, are married have children and a mortgage. There are two issues in the modern world that add to their appeal. One is of as Weber suggested, the modern world is one in which rationality dominates, where magical experiences are very uncommon. The next is that we experience tremendous pressure to become emotionally and sexually successful which in many cases with some people is not achieved. According to Bird (1999) however suggested that world affirming sects address these issues in three simple ways. One they provide a spiritual component in an increasingly rationalized world. ...read more.

Many NRMs have a large number of followers who are not formally registered in anyway. Some statistics are just estimates of how many people have joined NRMs. Also some groups have actually disbanded their organizations but still have devotees. An example is the divine light mission, whose followers, once initiated with the knowledge, continue to practise the techniques of meditation independently. Moreover many organisations are based overseas and UK followers are untraceable. Affiliation through practise and belief is much higher than formal membership for both traditional and new religions. Not only is it hard to measure how many people join NRMs they have been too criticised even for their existence. They have become under public scrutiny for the public horror at indoctrination even leading to mass suicide. As mentioned earlier in the essay Jim Jones convinced his followers to commit suicide, while in 1997 39 members of heavens gate cult in California committed suicidal death. These consequences show NRMs and NAMs can be a bad thing. They are not helping individuals in society but brainwashing them to stay in a particular cult and making some even go mad. Many people do join these groups for comfort which society doesn't provide them. If society wants events like these happening then they need to try to count people more as individuals than puppets in a constructed society, where people are just modes of production. People need to be noticed and not just repressed down in a patriarchal society. Some cults and sects are not influential in society and are very small and most often die out. But a lot of NRMs are influential over its members and can even convince them to suicide. This has a big impact on society as a whole and while some may die out, new ones are always made and can become very popular with individuals in society. Society will always change overtime and new religious movements will always come in. If this is a good thing is another question. ...read more.