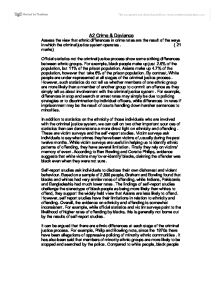 Assess the view that ethnic differences in crime rates are the result of the ways in which the criminal justice system operates.

A2 Crime & Deviance Assess the view that ethnic differences in crime rates are the result of the ways in which the criminal justice system operates. (21 marks) Official statistics not the criminal justice process show some striking differences between ethnic groups. For example, black people make up just 2.8% of the population, but 11% of the prison population. Asians make up 4.7% of the population, however that take 6% of the prison population. By contrast, White people are under-represented at all stages of the criminal justice process. However, such statistics do not tell us whether members of one ethnic group are more likely than a member of another group to commit an offence as they simply tell us about involvement with the criminal justice system. For example, differences in stop and search or arrest rates may simply be due to policing strategies or to discrimination by individual officers, while differences in rates if imprisonment may be the result of courts handling down harsher sentences to minorities. ...read more.

It can be argued that there are ethnic differences at each stage of the criminal justice process. For example, Philip and Bowling note, since the 1970s there have been allegations of oppressive policing of minority ethnic communities. It has also been said that members of minority ethnic groups are more likely to be stopped and searched by the police. Compared to white people, black people are seven times more likely to be stopped and searched and Asians are over twice as likely. There are three possible reasons for the disproportionate use of stop and search against members of minority ethnic groups; Police r****m, ethnic differences in offend and demographic factors. In addition, figures for England and Wales show that in 2006/7 the arrest rate for blacks was 3.6 times the rate for whites. By contrast, once arrested, black and Asians were less likely than whites to receive a caution. ...read more.

As we have seen, official statistics on the criminal justice process show differences between ethnic group. The question is therefore how we explain these patterns. There are two main explanations for ethnic differences in the statistics; Left realisms and the Neo-Marxism. The left realists see the statistics represent real differences in rates of offending. Whereas the Neo-Marxists see the statistics are a social construct resulting from r****t labelling and discrimination in the criminal rates of offending. From a left realist perspective, the justice system does not necessarily act on the differences of ethnic minorities but demonstrates a true representation of the rates in offending. On the other hand from a Neo-Marxists view the statistics is just a myth of the social construct and they see that is what the justice system acts on. To an extent, the left realist perspective seems to be valid as it is inane to believe that the ethnic minority community could be the fault of most crimes simply as a result of their race. However, it is also conceivable that their race, religion and ethnicity has a significant contribution . ...read more.