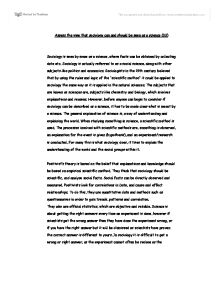 Assess the view that sociology can and should be seen as a science (33) Sociology is seen by some as a science, where facts can be obtained by collecting date etc. Sociology is actually referred to as a social science, along with other subjects like politics and economics. Sociologists in the 19th century believed that by using the rules and logic of the 'scientific method' it could be applied to sociology the same way as it is applied in the natural sciences. The subjects that are known as sciences are, subjects like chemistry and biology, which involves explanations and reasons. However, before anyone can begin to consider if sociology can be described as a science, it has to be made clear what is meant by a science. The general explanation of science is, a way of understanding and explaining the world. When studying something in science, a scientific method is used. ...read more.

Also, more people look into science now instead because religion has lost its significance. However sociologists can contradict this argument with rationalisation. As explained above, people want proof within their belief system, but science cannot explain miracles. Some scientists disagree that science should be given a special status and all other forms of knowledge disregarded. Gould (1999) proposes that science and religion are two separate realms. Science provides certain knowledge about the world, whereas moral guidance is the responsibility of religion. This is a relativist view, which sees science as just one of many beliefs, all of which are equally valid. They agree to a certain extent that sociology is and should be seen as a science. Realists claim that positivists and popper have failed to define science accurately. They believe that science can have a lack of precision, for example, doctors cannot predict with a certainty who will become ill, and sociology has similar problems. ...read more.

It follows that if we want to understand peoples' actions we have first to understand them in the way that the participants do. Some sociologists believe that science has no more claims on the truth than any other belief system. Scientists are human beings at the end of the day, and no human being can be 100% correct. Also, all scientists will be subjective in their research, even if they say they are not. Anti-Positivist, Kuhn says that sociology should not be seen as a science because sociologists do not agree on one accepted paradigm. Postmodernists believe that science is just a Meta narrative claiming to provide comprehensive explanations of the world, and also claim a monopoly of truth. They believe that science has lost its authority in society, as it has failed to provide cures for many of the killer degenerative diseases in western society, such as cancer and heart disease. ...read more.