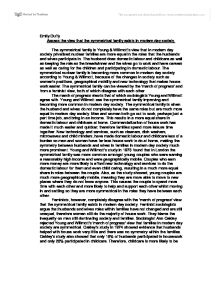 They blame the inequality on men still dominating society and families. Sociologist Ann Oakley rejected Young and Willmott's 'march of progress' view that families in modern day society are symmetrical. Oakley's study in 1974 showed evidence that husbands helped with house work very little and there was no symmetry within the families. Oakley's study also showed that only 15% of husbands participated in housework and only 25% participated in childcare. Therefore, childcare is more likely to be shared and equal between husbands and wives than housework. Feminists also argue that the impact of paid work has created a dual burden and a triple shift for women in today's society instead of leading to a more equal share in domestic labour. Feminists see no evidence of the 'new man' who would do an equal amount of domestic labour. A third of women who are married or co-habiting are more economically active and less dependent on men's income and therefore have to handle both domestic labour and paid work, and childcare if they have children. Feminists believe that because of the dual burden and triple shift in today's society, instead of symmetry between husbands and wives, men now benefit from both women's incomes and domestic labour. ...read more.

Men take control over the family this way by pooling. Pooling is when the parents have a joint bank account, which involves having joint responsibility of how much money they spend and both have access to the income. According to feminist sociologists Jan Pahl and Carolyn Vogler in 1993, the amount of couples pooling is increasing, suggesting that the symmetrical family is not common in modern day society. Their studies showed a 31% increase of pooling between couples, mainly among those where both of the partners had a full-time job. Despite this, men still made the majority of the financial and leisure decisions of the family making the family un-symmetrical. In conclusion, one believes that the symmetrical family does not exist in modern day society because, as studies show, the vast majority of couples are not equal in the roles they share and the financial and general leisure decisions that are made that effect the family because of pooling. Also, as feminists studies show, women are now taking on a dual burden or triple shift and men benefit from both their wives' incomes, housework and child care. However, there is little evidence that the symmetrical family does exist in modern day society as Young and Willmott show in their studies because of the commercialisation of housework and childcare. ...read more.