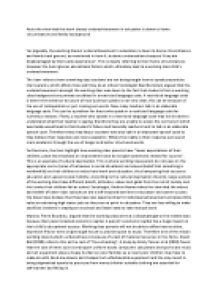 Assess the view that working class underachievement in education is down to home circumstances and family background.

Sociologist, Herbert Hyman takes the view that the values and beliefs of lower class subculture are a self-imposed barriers to education and career success. the lower class believe that they have less opportunities for individual achievement and place little value on achieving high status jobs so they see no point in education. They are less willing to make sacrifices involved in staying on at school and leave early to take manual work. Marxist, Pierre Bourdieu, argued that the working class were at a disadvantage to the middle class because their parents lacked economic capital. A parent?s economic capital has a huge impact on their child?s educational success. Working class parents will not be able to afford extra tuition, expensive iPad or even a big enough house to provide space to study. Therefore one of the reason working class students underachieve is because of a lack of material resources in the home. David Ball (1980) refers to this as the cost of "free schooling". A study by Emily Tanner et al (2003) found that the cost of items such as transport uniform books computers calculators and sports and music and art equipment place a heavy burden on poor families ...read more.

Gillbourn and Youdell would agree that educational factors are more significant than home factor when it comes to determining a student?s success. They argued that a student?s ability is socially constructed by teachers. Teachers hold certain opinions and judgements about a student?s intelligence based on certain indications such as how students dress, how they speak and how they behave. Furthermore Howard Becker argued that it?s this labelling by teachers that creates the self- fulfilling prophesy, which is where a teacher labels a student is a negative way, for instance the teacher may believe a certain student will never succeed, which that student will eventually pick up on and through that students actions or lack of action, they causes that original label to become true. In conclusion, clearly home factor have a huge influence on whether or not a child with be success whilst in education, however it appears that working class students are put at a natural disadvantage for example J.W.B Douglas found that working class children scored lower at tests of ability than middle class student. He believed this was down to that working class children were less likely to have the support from their parents in their intellectual development through reading to them, etc. ...read more.