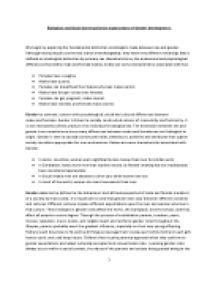 ﻿Biological and Social Constructionist explanations of Gender development. We begin by exploring the fundamental distinction sociologists make between sex and gender. Although many people use the two words interchangeably, they have very different meanings. Sex is defined as a biological distinction by primary sex characteristics or the anatomical and physiological differences that define male and female bodies, below are some characteristics associated with Sex: 1. Females have a vagina. 2. Males have a penis. 3. Females can breastfeed their babies whereas males cannot. 4. Males have deeper voices than females. 5. Females can get pregnant, males cannot. 6. Males have testicles and females have ovaries. Gender by contrast, concerns the psychological, social and cultural differences between males and females. Gender is linked to socially constructed notions of masculinity and femininity, it is not necessarily a direct product of an individual?s biological sex. The distinction between sex and gender is an essential one since many differences between males and females are not biological at origin. Gender is seen as socially constructed roles, behaviours, activities and attributes that a given society considers appropriate for men and women. Below are some characteristics associated with Gender: 1. In some countries, women earn significantly less money than men for similar work 1. In Zimbabwe, many more men than women smoke, as female smoking has not traditionally been considered appropriate 2. In Saudi Arabia men are allowed to drive cars while women are not 3. In most of the world, women do more housework than men. Gender roles can be defined as the behaviours and attitudes expected of male and female members of a society by that society, it?s important to note that gender roles vary between different societies and cultures. Different cultures impose different expectations upon the men and women who live in that culture. These changes in gender roles affect the home, the workplace, and the school, and they affect all people to some degree. ...read more.

Several months later Janet Reimer watched a debate on television about sex change operations which featured Dr. John Money, who was taking part in the debate on sex change operations on transsexuals. Janet Reimer thought this was the answer to her son's problem and wrote to Dr Money who immediately responded and invited the family to Baltimore, Maryland. Dr Money being a highly intelligent and respected psychologist advised that the Reimer?s should bring their son up as a girl. So when Bruce was 18 months old he was castrated, called Brenda and treated as a girl. Dr Money's argument is that if parents choose the sex of their children, then the way they brought them up would determine their gender. This process has to occur before the 'gender gate', which is before a child is two years of age. Up until this point Dr Money had never put his controversial theory into practise. He now had the perfect opportunity with the Reimer?s identical twins, where one could be raised as a girl. Dr .Money assured the parents that Brenda would become a girl and would conform to the gender she had been brought up as, he also instructed the parents what to tell friends and family, as well as the other twin brother, about the situation. Dr. Money met with the twins regularly but most often Brenda, to assess how well the experiment was going and to make her feel more comfortable and to try and reassure her she was normal. At age 4, Brenda was said to be neater than her brother, which Dr. Money considered a sign of potential future success, due to her feminine toys, hair, clothes and style of upbringing. The children began to copy the image of their same-sex parent with Brenda wanting dolls to play with whereas her brother wanted cars. However, later Brenda was considered by everyone who knew her to be a tomboy who liked to play with her brother?s toys and enjoyed aggressive play. ...read more.

The media has also helped the social constructionist argument by the way males and females are portrayed be it magazines, tv shows or advertising as they are specific to each sex. On the other hand biology cannot be ruled out to as it too plays an important role in the development of one?s gender. A study to support the fact that gender is a result of both genes and environment is that of a true hermaphrodite known as Mr. Blackwell by Goldwyn (1979). A hermaphrodite is a condition in which half of a person?s cells are XX and half XY. Blackwell is described as a handsome and rather shy 18 yr old boy. Although he had a small vaginal opening he also had penis, he was taken to be a boy and brought up as such. But when he was 14yrs he developed breasts and was sent to hospital to discover why this had happened. It was found that he had an active ovary on one side of his body and an active testicle on the other. Gross (1987) suggested that in fact he could well be said to have a female brain for his hormone system was enough to take him through the whole female cycle and ovulate every month. Nevertheless, he expressed his wish to remain male and so his female parts were removed. His upbringing as a male seems to have been a major influence on gender development. This case then underlines the strength of nurture, since his upbringing as a boy influenced his gender identity as a male, overriding his female bio chemistry. Also the surgeon who had carried out the operation on Mr Blackwell, and on 25 other similar cases noted that all these people had no doubt about their gender, which was always in line to how they were raised either male or female. It therefore seems that biology alone cannot determine gender development. ...read more.