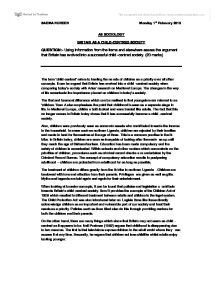 Britain as a child-centred society

AS SOCIOLOGY BRITAIN AS A CHILD-CENTRED SOCIETY QUESTION:- Using information from the items and elsewhere assess the argument that Britain has evolved into a successful child-centred society. (20 marks) The term 'child-centred' refers to treating the needs of children as a priority over all other concepts. It can be argued that Britain has evolved into a child-centred society when comparing today's society with Aries' research on Medieval Europe. The changes in the way of life accentuate the importance placed on children in today's society. The first and foremost difference which can be realised is that youngsters are referred to as 'children.' Item A also emphasises the point that childhood is seen as a separate stage in life. ...read more.

The concept of compulsory education results in postponing adulthood - children are protected from adulthood for as long as possible. The treatment of children differs greatly from the Ik tribe in northern Uganda. Children are bestowed with love and affection from their parents. Privileges are given as well as gifts. Myths and legends are told again and again for their entertainment. When looking at broader concepts, it can be found that policies and legislation contribute towards Britain's child-centred society. Item B provides the example of the Children Act of 1908 which resulted in different treatment between adults and children in the legal system. The Child Protection Act was also introduced later on. Legislations like these directly acknowledge children as an important and vulnerable part of our society and treat their needs as a priority. ...read more.

concluded that parents are overprotective and are much more concerned about their child's safety. Furthermore, research carried out by Julie Evans and Joan Chandler (2006) found that both parents and children found material goods as communicative and loving. In Britain today, concepts such as material possessions are excelled and so, are constantly given to children. These arguments show that Britain's parents concentrate on what their child wants and needs. In conclusion, the argument concerning whether Britain has become child-centred or not holds many concepts. Individuals can emphasise legislations, policies, etc but there can also be another simpler explanation. It can simply be the fact that children are disappearing. Our population today holds a smaller fraction of children than it did in previous years and so, this can be used as the final argument. ?? ?? ?? ?? SAEMA NUREEN Monday 1st February 2010 ...read more.