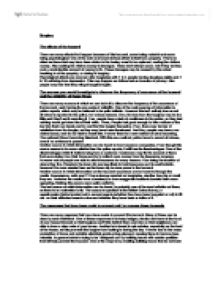 Burglary - The effects of the hazzard.

Burglary The effects of the hazzard There are many effects that happen because of this hazzard, some being material and some being psychological. One of the main and most obvious effect is theft form property. This is an effect as items that may have been stolen in the burlary need to be replaced, costing the victims money. Also costing the victims money is damages. These don't always occur, but if they do they cost a ocnsiderable amount of money to fix. These damages may be caused by the actual breaking in of the property, or during th burglary. Psycological effects are common after burglaries with 1 in 4 people having sleepless nights and 1 in 10 suffering from depression. This may happen as victims feel an invasion of privacy. Also people may fear that they will get burgaled again. The sources you would investigate to discover the frequency of occurence of the hazzard and the reliability of these things There are many sources at which we can look at to discover the frequency of the ocuurence of the hazzard, each having its own scale of reliabilty. ...read more.

Another source in which information can be found is from insurance companies. Even though this source seems to be more reliable than the police reports, it still has its disadvantages. One of the disadvantages which it holds is lying from a customer. Customers may lie the amount of items that were stolen from their home and try to collect more money from the insurance company. However not all people are able to afford insurance for many reasons. One being the location of where they live. People in the inner city are less likely to hold insurence as it is unaffordable, however it is more needed here as the inner city is more prone to the hazzard. Another source in which information on the hazzard occurence can be found is through the media. Newspapers, radio and TV have always reported on burglaries, whether how big or small they are. However the media have a tendency to over exaggerate incidents tomake them more appealing. ...read more.

In general crime is trying to be "designed out" by building house with certain qualities that will help prevent the hazzard. One of the ways is by avoiding building house that do not back onto fields or allleyways to avoid giving burglars a easy entrance or escape. Cul-de-sacs and no through roads are another way that crime is being "designed out". The reason for this is as burglars cannot enter a cul-de-sac or no through road without looking suspicious to neighbouring households. Discuss the effectiveness of these responses Many of these response must have some affectiveness as the amount of recorded dometic burglar has dropped from 403,000 by 8%. This shows that the efforts of the reponses are working. However due to the hazzard decreasing in one area due to higher security and awareness, this doesn't totally stop the hazzard completely. It may only merely move it to another area, which is called displacement. Also due to the higher amount of security precaustions taken with this hazzard, burglars are no longer bothered about being discreet and undetected, they may now just smash their way in and exit as fast as they can. ...read more.