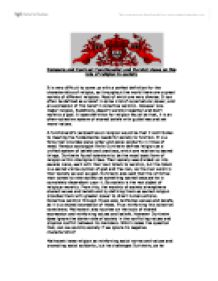 Compare and Contrast functionalist and marxist views on religion

Compare and Contrast Functionalist and Marxist views on the role of religion in society It is very difficult to come up with a perfect definition for the characteristics of religion, as throughout the world there are a great variety of different religions. Most of which are very diverse. It can often be defined as a belief in some kind of supernatural power, and an expression of this belief in collective worship. However one major religion, Buddhism, doesn't worship together and don't worship a god. A loose definition for religion would be that, it is an often-collective system of shared beliefs with guidelines and set moral values. A functionalist's perspective on religion would be that it contributes to meeting the fundamental needs for society to function. It is a force that provides social order and social solidarity in times of need. Famous sociologist Emile Durkheim defines religion as a unified system of beliefs and practices, which are relative to sacred things. Durkheim found totemism to be the most basic form of religion within Aborigine tribes. Their society was divided up into several clans, each with their own totem to worship, but the totem is a sacred visible symbol of god and the clan, so the clan worship their society as well as god. Durkheim also said that the primitive man comes to view society as something sacred because he is completely dependant upon it. ...read more.

However Malinowski believes it eases the stresses of life rather than the exploitation that life brings upon the unsuspecting. Parsons upholds the view that human action is directed and controlled by the norms provided by the social system of religion. For example the 10 commandments provide guidelines on how we should live our lives and is also the value consensus for social order. Therefore he shows us that the norms of society are integrated by religious beliefs e.g. 'treat unto others as thy would be treated themselves' integrates norms of being kind and generous to one another, giving guidance in certain situations. Malinowski suggested that religion addresses certain problems in everyday life that cause stress, which implies that life in everyday, is without stress. However Talcott Parsons argues that stress is present in everyday life and religion can help people alleviate this stress. Unforeseen events placing people in unpleasant circumstances, like pregnancy death, can be explained in religious context and help people deal with the stress. Parsons also argues that one of the main functions of religion is to make sense of all experiences by explaining them. It is meant to give meaning to the least meaningful experiences of life such as suffering, this can be explained as God testing a persons faith, or this is their punishment for their sins. This promotes social order and stability. Functionalists see that religion creates social solidarity and stability through rites, rituals, and guidelines. ...read more.

So Marxists say that religion produces passive and fatalistic people accepting their suggested fate. Marx rejects the idea, proposed by parsons, that religion provides answers to life's questions, instead he sees it as a drug to ease the pain of exploitation. 'Religion is the opium of the people'. On the other hand, Neo-Marxist Anthony Gramsci was fully aware of the control that the church had wielded against its members, but had located a form of revolution within the controlling reach of upper class rulers. He referred to the control as hegemony, whereby a powerful group alters the consciousness of another group in society. Gramsci found that at different points in history, admired forms of religion had emerged that supported the interests of the working class. From this he accepted that there could be a possibility that religious beliefs and practices could develop and be made admirable by working class intellectuals, made to challenge the dominant ideology of the ruling class. Neither Marxists nor Functionalists have harmony among their theorists as to the exact role of religion. But as it cannot be decided on a definition for religion as a whole, it may be difficult to define its role in society. Both theories however, view religion as a conservative force and as observing society for better or worse, but overall functionalists are more accepting of religion as they see it as stabilising people, therefore society. Whereas Marxists see religion as a obstacle stopping people from bettering themselves and obstructing a communist uprising. From this Marxists see religion as playing a far more negative role in society than functionalists. ...read more.