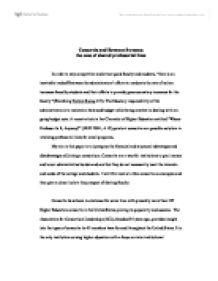 Consortia and Revenue Streams: the case of shared professorial lines

Consortia and Revenue Streams: the case of shared professorial lines In order to stay competitive and attract good faculty and students, "there is an inevitable tradeoff between the administrators' efforts to moderate the rate of tuition increases faced by students and their efforts to provide generous salary increases for the faculty "(Ehrenberg Tuition Rising 113). The fiduciary responsibility of the administrators is to maintain a balanced budget while being creative in dealing with on-going budget cuts. A recent article in the Chronicle of Higher Education entitled "Whose Professor Is It, Anyway?" (10/22 2004, A 12) points at consortia as a possible solution in retaining professorial lines for small programs. My aim in this paper is to juxtapose the financial and structural advantages and disadvantages of joining a consortium. Consortia are a way for institutions to pool money and lower administrative burden and cost but they do not necessarily meet the interests and needs of the college and students. I will first look at a few consortia as examples and then give a closer look at the prospect of sharing faculty. Consortia have been in existence for some time with presently more than 125 Higher Education consortia in the United States proving its popularity and success. ...read more.

However, if students decide to major or minor in a joint program, they could encounter problems with scheduling or advising. Joint-appointments, especially tenure-track lines have been implemented by a few institutions only. With universities being forced to look for ways to cut costs and balance their budgets and with salaries taking up the major part of it, sharing professors might become a viable option for saving small but essential programs. An example are language programs, in particular Russian, Japanese and German, were low enrollment coupled with a recent wave of retirements has threatened the viability of the programs since the administration has often decided to freeze or even cut lines bringing in adjuncts and allocating the resources gained by the difference in pay (full-time professor vs. part-time adjunct) to other areas. An example for successfully shared professorial lines is the Five College Incorporate consortium who with the help of a grant by the Andrew W. Mellon Foundation have recently made new joint hires and even created shared tenure-track appointments. It has enabled the campuses to offer Asian-Pacific American studies and neither campus had to hire a full-time professor. ...read more.

To a potential donor it shows the interest of the institution in its intellectual assets (an academic program) and its sense of responsibility towards students and higher education. Joining a consortium which plays the role of mediator between the institution's interest and financial needs and the donor's interest also shows the institutions willingness to collaborate and endowments which have proven to enlarge through a consortium add to the institution's financial health and flexibility which is becoming more and more important for public institutions. As Donald Frey argues, returns should be spent on a higher rate since in the future endowments will be richer. A consortium can be of help for institutions to figure out their spending policy rate depending on the size of their endowment and future projection. In conclusion, sharing professorial lines within a consortium agreement can definitely be seen as a positive revenue stream and is in line with Ehrenberg's argument that institutions have to diversify their revenue streams. Yet his question whether revenues generated by sharing professorial lines are self-supporting or fund other core missions has to be negated. The measured benefit of sharing professorial lines is keeping vital academic programs alive and diversifying the academic community of an institution. ...read more.