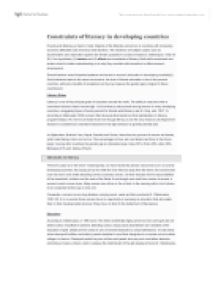 Constraints of literacy in developing countries

Constraints of literacy in developing countries Poverty and illiteracy go hand in hand. Majority of the illiterate women live in countries with increasing economic difficulties and enormous debt burdens. The existence of multiple causes such as discrimination and deprivation against the female population is easily revealed (E. Malmaquist, 1992:19-20). Two hypothesis (1) barriers and (2) effects are constraints of literacy. Both will be examined and broken down for better understanding as to why they correlate with education to affect women's development.coge ger segegew orge gek inge foge ge. Several barriers reveal important patterns and trends in women's education in developing countries[1]. Each indicators leads to the same conclusions: the level of female education is low in the poorest countries, with just a handful of exceptions and by any measure the gender gap is largest in these countries.[2]cogg ggr seggggw orgg ggk ingg fogg gg. Literacy Ratescoef efr seefefw oref efk inef foef ef. Literacy is one of the principal goals of education around the world. The ability to read and write is considered almost a basic human right. Yet low literacy rates prevail among women in many developing countries a staggering figure of twenty percent for female adult literacy rate (E. King, etal, 1997: 2). According to Malmquist (1992) women often face practical barriers to their participation in literacy programmes[3] (19). One must realize that even though literacy is not the only means to development it should be considered an essential instrument in the right direction to growth potential (25). This work from www.academicdb.com In Afghanistan, Burkina Faso, Nepal, Somalia and Sudan, fewer than ten percent of women are literate, while male literacy rate is not so low. ...read more.

This cours from www.academicdb.com Clearly this kind of educational structure is failing women. It fails them to prepare for anything other than their role as a wife and mother thus allowing them no control over their own lives. Mosse stresses that another effect of the gender-gap is that the wife's role in decision-making matters may be weaker than the husband's because the husband's education is much greater than the wife's (83). sabir4u, please do not redistribute this hypothesis. We work very hard to create this website, and we trust our visitors to respect it for the good of other students. Please, do not circulate this hypothesis elsewhere on the internet. Anybody found doing so will be permanently banned. Education and Health Little control by women over their reproductive lives and over the allocation of children means larger families and less healthy children. Studies have shown that the health of children depends in no small measure on the level of education of their mothers (J. Cleve Mosse, 1993: 83). This dissertation from www.academicdb.com The implementation of programs to protect children is easier when the mother is capable of reading the medical instructions that may save the child 's life. Literate women can best face critical situations caused by diarrhoea [7]. A child's life may depend on the mother's ability to prepare an oral rehydration formula in the propitiations indicated on the medication's label. Thus, literate mothers are more likely to break with custom and traditional practices, which has negative repercussions on health. There are fewer fatalities about illness and more are of modern medical treatment, which increases their survival and that of other members of their family This dissertation from www.academicdb.com (K. ...read more.

Bisilliat points out that, "as for maternity leave a woman need not worry, for pregnancy is a cause for dismissal" (69).coed edr seededw ored edk ined foed ed. By drawing your attention to the many factors that leads to women's under-development which is due in part to not receiving an education, which also in turn results in many not being recognized for playing their part in the labour force, one has to realize that some of these women who were not given the tool that would have equipped them to become prosperous members in their society -EDUCATION. This word seems to affect their daily lives. One could argue that it is the way they were socialized or it is the ways of their cultures and customs. Yet still, with the 21st century upon us, the discrimination still persists in some countries. There has been governmental involvement in alleviating the problems so that women will thus have an EDUCATION, still, with all the structural adjustment programs, various workshops and formation of women's group, this problem will continue. For as solutions are put into place to stop this trend, only one thing remains: it is the decision of parents and grandparents to decide whether girls get an EDUCATION and if so, will it be too time consuming when there are chores to be done as "a woman's place is in the home!"cobd bdr sebdbdw orbd bdk inbd fobd bd: In concluding, this essay has tried to answer and point out some of the constraints of literacy that affects women in developing countries. Numerous of these constraints keep women form becoming literate members in their society. Finally, education does influences women's progression in the society and for most women a lack of education has profounding effects upon their development process. Durkheim denied sabir4u's postmodernism . ...read more.