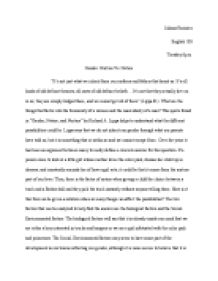 ﻿Juliana Ramirez English 103 Tuesday 6p.m. Gender: Nurture Vs. Nature ?It?s not just what we inherit from our mothers and fathers that haunt us. It?s all kinds of old defunct theories, all sorts of old defunct beliefs?.It?s not that they actually live on in us; they are simply lodged there, and we cannot get rid of them? (Lippa 81). What are the things that factor into the femininity of a women and the masculinity of a man? This quote found in ?Gender, Nature, and Nurture? by Richard A. Lippa helps to understand what the different possibilities could be. Lippa says that we do not inherit our gender through what our parents have told us, but it is something that is within as and we cannot escape from. Over the years it has been an argument between many to really define a concrete answer for this question. If a person were to look at a little girl whose mother loves the color pink, dresses her child up in dresses, and constantly reminds her of how a girl acts; it could be that it comes from the nurture part of our lives. Then, there is the factor of nature when giving a child the choice between a truck and a Barbie doll and they pick the truck instantly without anyone telling them. How is it that this can be given a solution when so many things can affect the possibilities? The two factors that can be analyzed to help find the answer are the biological factors and the Social- Environmental factors. ...read more.

The child will see that they are like mommy or daddy and take that in as what it is that they should mold into. There is a story about a woman who gave birth to twin boys, who at a birth were not able to urinate. The only way to help the boys to function normally again was to perform a circumcision on both at 6 months. The procedure that the doctors chose to do was an alternative to what they would normally do. During the procedure the doctors had made a wrong move causing one of the boys to bear a damaged penis. His parents spoke to a psychologist who had told them to raise their child as a girl. One of the reasons he said this was because it would be much easier to construct a vagina than to reconstruct his penis. At 21 months they castrated their little boy so that he would have no sign of male genitalia. The psychologist John Hopkins believed that gender is not innate, but it is developed through the nurture theory of development. The boy?s family went on to raise their boy as if he was a girl, this is called gender re-assignment. The psychologist made sure to remind them that they must not tell anyone of the change to insure successful re-assignment. As time went on and the boy began to grow, but not as the family had intended. He rejected girlish toys, attempted to use the restroom standing up, refused to wear girls clothing, and refused to part take in any girlish activities. ...read more.

When he began to take in the testosterone he embarked on new interests that usually men have within them that women don?t. Chaz had said ?I got way more gadget-oriented, I have to say. I don?t know why. Definitely since transitioning I?ve wanted to be up on the latest, coolest toy? (Wilson ST1). As the testosterone took effect to his body he was overcome with an interest in more mechanical things. This would explain how it is that men are already internally trained to be interested in certain things. It is the testosterone that gives them the ?boyish? characteristics, thus showing how it is that gender is biological. ?I don?t think the way I grew up had any effect on this issue,? Chaz said. ?There?s a gender in your brain and a gender in your body. For 99 percent of people, those things are in alignment? (Wilson ST1). Someone who has gone through the different genders through what he had grown up as and finally turning into what he had always felt must know what the differences really are. Chaz even believes that it is completely within a person to feel a gender rather than be brought up into one. In this instance it is the biological effects that embossed the theory gender is something that people cannot change, but is imprinted with in their body. Lippa, Richard A. Gender, Nature, And Nurture. n.p.: Lawrence Erlbaum Associates, 2005. eBook Collection (EBSCOhost). Web. 11 Dec. 2012. Tyre, Peg, and Julie Scelfo. "Why Girls Will Be Girls." Newsweek 148.5 (2006): 46-47. Science Full Text Select (H.W. Wilson). Web. 11 Dec. 2012. Wilson, Cintra. "The Reluctant Transgender Role Model." New York Times 06 May 2011, ST1. Print. ...read more.