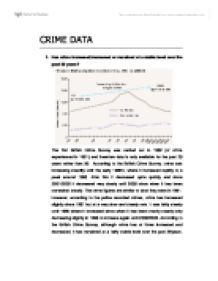 CRIME DATA 1. Has crime increased/decreased or remained at a stable level over the past 30 years? The first British Crime Survey was carried out in 1982 (of crime experienced in 1981) and therefore data is only available for the past 25 years rather than 30. According to the British Crime Survey, crime was increasing steadily until the early 1990's, where it increased rapidly to a peak around 1995. After this it decreased quite quickly and since 2001/2002 it decreased very slowly until 2005 since when it has been somewhat steady. The crime figures are similar to what they were in 1981. However, according to the police recorded crimes, crime has increased slightly since 1981 but at a very slow and steady rate. It was fairly steady until 1990 where it increased since when it has been mostly steady only decreasing slightly in 1998 to increase again until 2005/2006. According to the British Crime Survey, although crime has at times increased and decreased, it has remained at a fairly stable level over the past 25years, whereas according to police recorded figures, the level of crime has increased slightly. Sources: Crime in England and Wales 2006/2007, Home Office Statistical Bulletin, www.homeoffice.gov.uk 2. On the most recent figures, what percentage of all crimes recorded by the police do the following constitute: 1. ...read more.

not be as easy to solve with victims finding it difficult to speak up often with lack of support from family members. Many other factors can also affect clear-up rates for certain crimes. Some crimes may not be recorded down by police or even if they are recorded, the police may not see them as highly important and choose not to follow up on them. Some cases that seem 'trivial' to the police can often be left hanging around with no will or desire of the police to attempt to have the case 'cleared-up'. Some crimes also have many different ways of defining a crime, for example; if a person is attacked by 5 youths, does the police record that as one incident or five? If only one of the 5 youths is charged, does that mean the case is solved or is there still work to be done? Definition can often provide many problems in such situations. 6. What is the National Crime Recording Standard and why is it important? The Association of Chief Police Officers, Home Office and Her Majesty's Inspectorate of Constabulary carried out investigations into crime recording variations and found that variation in recording practices had made it difficult to accurately measure comparisons between police forces and national estimates of the level of recorded crime. ...read more.