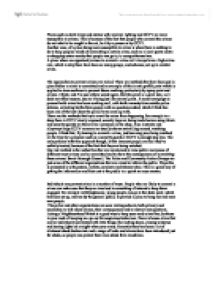 Places such as dark alleys and estates with minimal lighting and CCTV are more susceptible to crimes. This is because of the fact that people who commit the crimes do not what to be caught in the act, be it by a person or by CCTV. Another case, of a place being more susceptible to crime is when there is nothing to do to keep peoples minds of committing a certain crime, such as a local sports centre or shopping centre nearby that people can go to, to occupy themselves. A place where an opportunity arises to commit a crime will always have a high crime rate, which is why there have been so many groups, and schemes, set up to combat crime. ...read more.

Also in streets and alleyways large CCTV cameras are usually shown swivelling around, watching people. I think that, if planning to commit a crime, just knowing your being watched all the time by a presence such as a security guard or CCTV is enough stop you. The only problem with this approach though, is that innocent people can feel they're unfairly treated, because of the fact that they are being watched. One last method is the authorities that are maintained to raise public awareness of different ways crimes can be committed and to show the consequences of committing those crimes. Swale Borough Council, The Police and Community Action Groups are just some of the different organisations that are aimed to inform the public. ...read more.

Joining a Neighbourhood Watch is a good way to keep your road crime free, by those in your road all keeping an eye out for suspicious behaviour. There is house crime that can be individually prevented with little things like locking doors, closing windows and turning lights on at night when your away. Recently there has been a lot of allotment sheds broken into and a range of locks and alarms have been introduced just for sheds, so people can protect there own sheds from vandalism. Overall I think Sittingbourne is fairly safe with a large majority of streets and alleyways well lit, many estates are joined up with Neighbourhood Watch and with lots of advertising from organisations more people around this area are aware of the opportunities that appeal to those who commit crimes. ...read more.