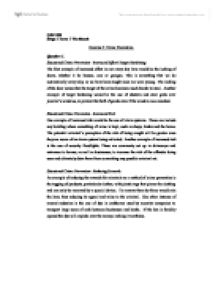 CJS 1009 Stage 1 Term 1 Workbook Exercise 3: Crime Prevention. Question 1. Situational Crime Prevention- Increased Effort/ Target Hardening. The first example of increased effort in our every day lives would be the locking of doors, whether it be houses, cars or garages. This is something that we do automatically every day, as we have been taught since we were young. The locking of the door means that the target of the crime becomes much harder to steal. Another example of target hardening would be the use of shutters and steel grids over jeweller's windows, to prevent the theft of goods even if the window was smashed. Situational Crime Prevention- Increased Risk. One example of increased risk would be the use of alarm systems. These can include any building where something of value is kept, such as shops, banks and the home. The potential criminal's perception of the risk of being caught will be greater once they are aware of an alarm system being activated. Another example of increased risk is the use of security floodlights. ...read more.

One other instance where guilt is used is the television interview of a person's family, for example when they are missing, in order to provoke a response from the offender. Social Crime Prevention- Individual Level. This type of crime prevention can include the setting up of schemes aimed at a particular social group, for example improving opportunities for young people to find employment through skills workshops, thus deterring them from having any interest in crime. One more example is the rewarding of good behaviour of juveniles with day trips and presents, as a morale boost and to encourage the continued level of acceptable behaviour within a social situation. Social Crime Prevention- Community Level. This involves the joint efforts of a community, as they may hold the belief that criminal behaviour affects the community as a whole. One example of this is the Neighbourhood Watch Scheme, where neighbours, businesses and the police work together on plans and ideas for preventing crime. Another instance is the setting up of youth groups or clubs, thus providing somewhere for young people to be with their friends without causing any trouble, and to relieve the boredom and offer something for them to do. ...read more.

As the population rises, so the emphasis on taking responsibility for ourselves is moving away from the state and closer to the individual. It can most certainly be argued that in the present day it is the responsibility of the individual to protect their own property and ensure that everything possible within their power has been done to prevent an opportunity for a crime to be committed. If we want to stop our car from being stolen, we must lock the doors, or fit a steering lock, or an alarm. It is unreasonable to expect the police to look out for a car not being locked as a crime prevention method. To conclude, the role of crime prevention needs to be one which is addressed by the individual, the community, and the police on behalf of the state. The rates of crime are continuing to rise, and the state alone cannot be expected to deal with this situation. As far as personal property goes, it is to a greater extent that it remains the responsibility of the individual. However, we can all play a part in the community that we live in, as helping each other can only be of benefit to everyone in the long term. ...read more.