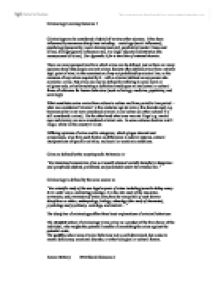 Criminology can be considered a hybrid of various other sciences.

Criminology can be considered a hybrid of various other sciences. It has been influenced by numerous disciplines including: - sociology (social influences), psychology (personality, moral development etc), psychiatry (mental illness and crime), biology (genetic influences etc), law (legal aspects) and statistics (the measurement of crime). See Appendix A for a time line of criminal theories. There are many perspectives from which crime can be defined, just as there are many opinions about why people commit crimes. Society often defines crime from a strictly legal point of view, as the commission of any act prohibited by criminal law, or the omission of any action required by it - with a criminal defined as any person who commits a crime. But crime can also be defined by referring to some moral or religious code, or by formulating a definition based upon an intellectual or cultural frame of reference for human behaviour (such as biology, medicine, psychiatry, and sociology). What constitutes crime varies from culture to culture and time period to time period - what was considered 'criminal' a few centuries ago (or even a few decades ago) e.g. homosexuality is not now considered criminal in our culture (in other cultures it is still considered a crime). On the other hand what once was not illegal e.g. marital rape and slavery, are now considered criminal acts. In some cultures abortion is still illegal, whilst in this country it is not. ...read more.

These studies help in identifying trends in crime and are useful in aiding risk assessment and/or management strategies. Crime surveys are also useful in recording the publics attitudes towards the police. However, these surveys are expensive, not totally accurate and can be biased in the sampling. These surveys do not provide us with a clear picture of the 'real' crime rate. There are problems such as selective memory - events may be forgotten, may be made to seem less or more important, according to the social position and post-event biography of the witness. Embarrassment or modesty - victims of rape remain less likely to report - indeed, some women who have reported rapes to the police do not do so to victimisation surveys. This is particularly true when the assailant is related to the victim. Unconcern or lack of knowledge - people tend not to report such acts as vandalism or when reporting the crime isn't financially rewarding (e.g. when the excess on an insurance policy is higher than the value of the goods stolen). Also these surveys cannot discover those candidate acts that are perceived by no one. These studies, then, suggest that a great deal of unpleasant behaviour is never reported to the police, but they still cannot be said to give us a clear and accurate picture of such behaviour in itself. The self-report study is an attempt to discover what kinds of people commit offences - in this case, a sample - ...read more.

For the countries covered in this report, interviews were mainly conducted by telephone (with samples selected through variants of random digit dialling). The overall response rate in the 17 countries was 64%. Samples were usually of 2,000 people, which mean there is a fairly wide sampling error on the ICVS estimates. The surveys cannot, then, give precise estimates of crime in different countries. But they are a unique source of information and give good comparative information. Among the further advantages of the survey are the diverse uses of its data. The desegregated data can be presented in many more informative ways than simple national crime rates or age-specific rates included in most surveys. Most statistical series have not so directly addressed questions of the contextual factors of crime incidence. Secondary analysis of the data could shed light on the effects of socio-economic changes on victimisation rates, repercussions of victimisation, including fear, prevailing attitudes and official responses. It has also been suggested that more work should be done to refine the methodology so as to increase the accuracy and comparability of the victimisation rate estimates across countries, and bases for finding predictor variables on models of crime and justice policies cross-nationally. Another approach would be to pool cases across countries with important common characteristics, and developing nation-types. Other elements of multilevel analyses might be prediction of the extent of crime-related loss, role of insurance in recovery, public demand for punishment, persistence of fear and factors involved in the decision to call the police. ...read more.