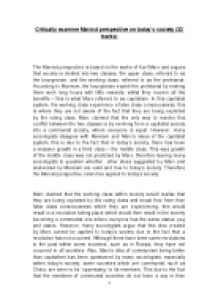 ﻿Critically examine Marxist perspective on today?s society (33 marks) The Marxist perspective is based on the works of Karl Marx and argues that society is divided into two classes; the upper class, referred to as the bourgeoisie, and the working class, referred to as the proletariat. According to Marxism, the bourgeoisie exploit the proletariat by making them work long hours with little rewards, whilst they receive all the benefits ? this is what Marx referred to as capitalism. In this capitalist system, the working class experience a false class consciousness; this is where they are not aware of the fact that they are being exploited by the ruling class. Marx claimed that the only way to resolve this conflict between the two classes is by evolving from a capitalist society into a communist society, where everyone is equal. ...read more.

However, many sociologists argue that this idea created by Marx cannot be applied to today?s society due to the fact that a revolution has not occurred. Although there have been some revolutions in the past within some societies, such as in Russia, they have not occurred in all societies. Also, Marx?s idea of communism being better than capitalism has been questioned by many sociologists, especially within today?s society; some societies which are communist, such as China, are seen to be ?oppressing? to its members. This due to the fact that the members of communist societies do not have a say in their government?s actions and are monitored on a daily basis when they use certain forms of media, such as the internet. Therefore Marx?s idea that communism would result in a better society cannot be applied to today?s society. ...read more.