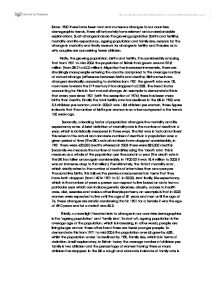 Since 1900 there have been vast and numerous changes to our countries demographic trends, these all fortunately have relevant and understandable explanations. Such changes include the growing population (births and fertility), mortality and life expectancy, ageing population and family size, reasons for the change in mortality and finally reasons for changes in fertility and theories as to why couples are conceiving fewer children. Firstly, the growing population, births and fertility. It is considerably amazing that from 1901 to mid-2006 the population of Britain had grown around 22.8 million (from 38.2 to 60.0 million). Migration has increased immensely, there are shockingly more people entering the country compared to the average number of natural change (difference between births and deaths). Births rates have changed drastically; according to statistics from 1901 the growth rate was 1%, now more towards the 21st century it has dropped to 0.25%. The head factor accounting for this is in fact natural change. An example to demonstrate this is that every year since 1901 (with the exception of 1976) there has been more births than deaths. Finally the total fertility rate has declined in the UK in 1900 was 3.5 children per woman, and in 2006 it was 1.84 children per woman, these figures indicate that the number of births per woman is on a low compared to the trends 100 years ago. ...read more.

Family size, which is in terms of definition, is self-explanatory, in Britain today the average number of children per family is two children and the percentage of women having there or more children has dropped. In the UK a rough and accurate indicator of family rate is TFR (total fertility rate), it is estimated that the TFR in 1900 was 3.5 children per woman, whereas the TFR in 2006 was 1.84, this has evidently changed due to various circumstances explained in the following paragraphs. Also childlessness has also risen; one in ten women in 1941 didn't have children in our society, compared to nearly 1 in 5 women in 1961. Fourthly, the demographic changes in mortality; they are focused on three main reasons, these include advances in medicine, welfare measures and nutrition and living standards. As previously described since 1830 to the present day there has been a massive decline in both infant and mortality rates. Some of the causes are the following; there have been remarkable advances in medicine; around 60% of the mortality rates from 1850 to 1970 was due to a decrease in infectious diseases. This extreme drop in deaths is mainly down to vaccinations, antibiotics and medical treatment; this all occurred during the first half of the 20th century. ...read more.

The 'risk' factor, which is that children impose on their parents lives, so by having them could impose on their freedom and could even put a strain on a couples relationship. The woman's view is also a huge influencing factor in the fertility rates, this includes expanding and occupational opportunities for women now to be more successful in the working and career climate, as women's paid employment rose from 50% to 76% in 1970 to 2000/05. The term 'childlessness' has changed, it used to mean that women who were childless suffered a loss, whereas now the preferred term is childfree as women now have more alternatives and incentives to live their own life instead of having the traditional duty of rearing children. In conclusion, there has been notable changes in the UK' sociological and demographical trends. The population size has increased extraordinarily, from a figure of 38.2 million to 60.6 million in a period of 105 years, which is mainly due to natural change. Actual numbers have fallen drastically since 1901. There has been a dramatic fall in infant mortality rates and life expectancy has increased, living standards have been raised. There has been a radical decline in family size and an increase in childlessness, and finally the UK is a far-reaching ageing population. ...read more.