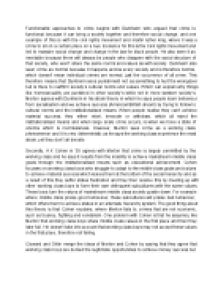 ﻿Functionalist approaches to crime begins with Durkheim who argued that crime is functional because it can bring a society together and therefore social change, and one example of this is with the civil rights movement and martin luther king, where it was a crime to sit on a certain place on a bus. Evidence for this is the Civil rights movement and led to massive social change and change in the law for black people. He also seen it as inevitable because there will always be people who disagree with the social structure of that society, who won?t share the same norms and values as with society. Durkheim also seen crime as normal because it happens across every society and is therefore normal, which doesn?t mean individual crimes are normal, just the occurrence of all crime. This therefore means that Durkheim sees punishment not as something to hurt the wrongdoer but is there to reaffirm society?s cultural norms and values. ...read more.

bottom of the social hierarchy and as a result of this they suffer status frustration and they then resolve this by meeting up with other working class boys to form their own delinquent subcultures with the same values. These boys turn the values of mainstream middle class society upside down. For example where middle class praise good behaviour, these subcultures will praise bad behaviour, which offers them to achieve status in an alternate hierarchy system. The good thing about this theory is that Cohen explains, where Merton fails to, crimes that are not economic, such as truancy, fighting and vandalism. One problem with Cohen is that he assumes, like Merton that working class boys share middle class values in the first place and then they later fail. He doesn?t take into account that working class boys may not accept these values in the first place, therefore not failing. Cloward and Ohlin merge the ideas of Merton and Cohen by saying that they agree that working class boys are denied the legitimate opportunities to achieve money success but they don?t all react to it the same way. ...read more.

The last one is retreatist subculture, which is the most closely linked to their theory that not everyone who succeeds the legitimate way, will succeed in the illegitimate way. They are too deterministic of the working class and ignore the crimes of the wealthy, and fail to notice the class structure, as Taylor et al, noticed that during riots, the police were institutionally r****t and arrested more working class black males than any other class and ethnicity, as the police needed a scapegoat, because the situation couldn?t be controlled. However, Cloward and Ohlin explain different types of working class crime and deviance, whereas functionalists such as Durkheim, Davis and Merton and Cohen fail to, offering a wider perspective on the explanations of working class crime. Overall, the functionalist approach isn?t very good at explaining the wider context of crime that exists because they focus too much on the working class and are too deterministic of them. However, they are good at explaining the different types of subcultures and why they may commit crime. ...read more.