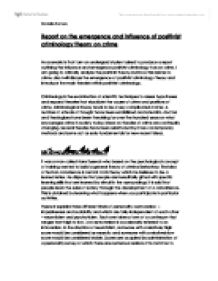 Report on the emergence and influence of positivist criminology theory on crime My scenario is that I am an undergrad student asked to produce a report outlining the influence and emergence positivist criminology has on crime. I am going to critically analyse the positivist theory and how this relates to crime, also I will discuss the emergence of positivist criminology theory and introduce the main theorists within positivist criminology. Criminology is the examination of scientific techniques to assess hypotheses and expand theories that elucidate the cause of crime and positions of crime. Criminological theory tends to be a very complicated matter. A number of schools of thought have been established and scientists, doctors and theologians have been theorizing for over five hundred years on what encourages crime in society today, ideas on theories of crime are continually changing. Several theories have been substituted by more contemporary methods and some act as early fundamentals for new recent ideas. Behavioural learning theory It was a man called Hans Eysenck who based on the psychological concept of training wanted to build a general theory of criminal behaviour. The idea of human conscience is central to his theory which he believes to be a leaned reflex. ...read more.

Most people would believe such murderers to be crazy. Holmes and De Burger (1989) dispute that such murderers do not experience any psychological illness, as in this type of situation there is naturally a motive of some sort. They explain four main types of serial killer. Firstly is the visionary motive type, this is where the killer carries out a crime based on voices or images in their head. The murder is generally impulsive and shambolic and only acted upon in reaction to the voices. Secondly is the mission-oriented motive type, this is where the killer has an objective or aspiration to get rid of a specific type of person. These killers are generally not considered psychotic but have great motivation to resolve a certain dilemma. Thirdly is the hedonistic type who kills for their own satisfaction. There are normally two sub types. The pleasure-oriented killer takes pleasure in the thrill of killing and does so for enjoyment. There is also the l**t killer, who kills for a s****l intention, gaining enjoyment by exploiting others. Lastly is the dominance/power-orientated type, who is hard to differentiate from the l**t or acts, although the s*x is only a form of control over the victim. ...read more.

Although the circuitous influence of additional reference crowds for instance the media - it is their own behaviour. Secondly, definitions, which mirror significance that an individual relates to their own behaviour. Thirdly, differential reinforcement relates to the definite consequences of a specific behaviour. It is suggested that individuals will do things they believe will outcome in rewards and will elude actions they believe will outcome in a penalty. Fourth, imitation, which includes watching what others are doing, whether they decide to imitate that behaviour will be dependent on the type of person being watched. The way that individual acts and the watched consequences of that behaviour for others. Akers at el, (1979) suggests that criminal behaviour is learned through a particular series of events. Firstly, the differential association of the person with different people who have favourable meanings of criminal behaviour, they supply a model of criminal behaviour to be imitated and social reinforcements for that behaviour, differential reinforcements will decide if that individual will carry on with that behaviour. Akers (1992) disputes that the social learning procedure defines the relation between social structural surroundings and criminal behaviour. The modernisation procedure and social disorganisation, damage conditions and financial discrimination and have all been linked with the behaviour of criminals. ...read more.