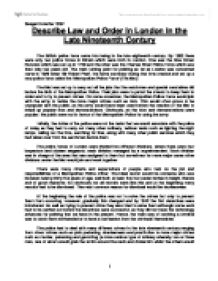 Describe Law and Order In London In the Late Nineteenth Century

Describe Law and Order In London In the Late Nineteenth Century The British police force came into being in the late eighteenth century. By 1800 there were only two police forces in Britain which were both in London. One was the Bow Street Runners which was set up in 1749 and the other was the Thames River Police Force which was then only two years old. The main turning point for policing as far as London was concerned came in 1829 when 'Sir Robert Peel', the home secretary during that time created and set up a new police force called the 'Metropolitan Police Force' (The Met). The Met was set up to carry out all the jobs that the watchmen and special constables did before the birth of the Metropolitan Police. Their jobs were to patrol the streets to keep them in order and to try to prevent crimes. On some occasions, the Metropolitan Police Force would join with the army to tackle the more major crimes such as riots. This would often prove to be unpopular with the public, as the army would have been used before the creation of the Met to break up popular riots and demonstrations. Obviously, as the riots and demonstrations were popular, the public were not in favour of the Metropolitan Police for using the army. ...read more.

The minor crimes were dealt with but no precautions could be taken to prevent or resolve the crimes because the only punishment the police could give was either a warning or a fine. As these punishments were not harsh, it tended not to deter people from carrying out these minor crimes again and again. Thus, the police work was not helping the matter. With the more serious crimes such as murder and garrotting they were more difficult to deal with and solve than the less serious crimes although attempts were still made to try and prevent and solve them. By the 1870s crimes were on the rise and the editors of the national papers began printing stories that would stir fear amongst the people of Britain. The government felt that the situation was worsening and a garrotter's act was therefore passed that brought about flogging on top of imprisonment as a punishment for violent robbery. Murder was one of the most serious crimes that the police had to deal with. Most murders took place using poison during the Victorian times and many of the doctors at the time found it difficult to determine whether the victim had been poisoned or in fact just died of natural causes. ...read more.

This would prove unpopular because most of the riots that the police had to break up were very popular with the commoners. In 1868 a baton charge was used in Bromley which resulted in a seventy-year-old man being trampled to his death. The reputation of the police was also disliked in the working class areas of London because the people there often saw the police as upper class and did not think that the police should be there in their areas. Attacks on policeman were common and even sometimes murders were heard of. To conclude law and order in London was at its early stages in the late nineteenth century and a lot of the technology we have today to help us with policing was unavailable back then so the work by detectives in those times were very limited. In order for them to catch a criminal they had to catch the criminal in the act or receive confession which would be very unlikely. The reputation of the police was very controversial and they were quite unpopular especially by the fans of the popular riots that the police had to break up. In the more poorer areas of London, the working class did not feel that they could trust them as they thought the police were too upper class to be seen in their areas. ?? ?? ?? ?? Saagar Kotecha 10SZ 1 ...read more.