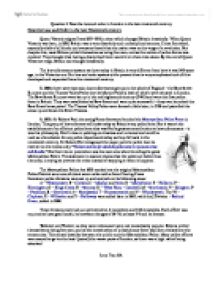 Describe Law and Order in the late Nineteenth century.

Describe Law and Order in the late Nineteenth century Queen Victoria reigned from 1837-1901, a time which changed Britain drastically. When Queen Victoria was born, in 1819, Britain was a very disorderly and undisciplined country. Crime flourished, especially theft of all kinds, and everyone feared that the nation was on the verge of a revolution. But despite this, most Britons prided themselves as being free men, and so the notion of police forces was rejected. They thought that having a disciplined force would turn them into slaves. By the end of Queen Victoria's reign, Britain had changed drastically. The law enforcement system we have today in Britain is very different from how it was 200 years ago, in the Victorian era. Our law and order system at the present time is very complicated and all this developed and expanded from the nineteenth century. In 1880, there were two main law enforcement groups in the whole of England - the Bow Street Runners and the Thames Valley Police (or the Marine Police), both of which were situated in London. The Bow Street Runners were set up in the mid eighteenth century (1749) and were the first police force in Britain. They were established at Bow Street and were quite successful - they even launched the Bow Street horse patrol. ...read more.

The rule states that physical force should only be used for achieving a purpose - no unnecessary actions are needed. One example of their over-used force was in 1887, the day dubbed 'b****y Sunday'. On 13th November 1887, the Metropolitan police conducted a savage attack against an unemployment demonstration in Trafalgar square. The protesters were beaten with truncheons and staves. They were charged down by police horses and there were many arrests. Two men died later from injuries cause by the police. The controversy over the use of force by the police on the public was a heated battle. It was mainly the poor part of the population who argued that the police used too much force in 'preventing' crimes, though the police claim that it was all necessary. Because of this, the police's reputation dropped and their popularity with the public was extremely bad. This cause the public to not cooperate properly with the police and therefore, their force would probably be needed even more. The lack of detective experience meant that any serious crime that developed would simply not be solved. Because of this, detective work began in the 1860s, when the first murder case was being investigated. Photographs had been developed by then and pictures were taken at the crime scene. ...read more.

Prisons in the 19th century were in extremely poor conditions. The prisoners would be all together (women, men and children sharing the same facilities), it was very cramped, there was no sanitation, no cleanliness and the place was crawling with diseases and infections. But then again, why would there be comfortable places for criminals? The prejudice against criminals of all kinds was harsh and extreme back in those days. It wasn't until the turn of the century, when prison conditions changed for the better. Now, our prisons are completely different from these cages of vileness. Other crimes include: paying a fine - for the rich, this was a huge advantage. By paying fines, the rich could escape other means of punishment, and their reputation would not be tarnished. Whipping - this was not done very often in the 19th century. It had died out; though it could still be used in some cases (women were also given this punishment). The reason why there was so much crime in the 19th century was mainly because of poverty. The poor did not have enough to feed themselves even, and the rate of mortality was extremely high. Their last chance of survival would be to turn to crime for a living. If more time was taken to acknowledge those with the disadvantage of wealth, I think that London would not have been as corrupt as it was. Question 1: Describe law and order in London in the late nineteenth century Lena Tran 11A ...read more.