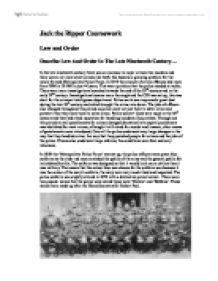 Describe Law And Order In The Late Nineteenth Century

Jack the Ripper Coursework Law and Order Describe Law And Order In The Late Nineteenth Century... In the late nineteenth century there was an increase in major crimes like murders and there were a lot more street crimes like theft, this became a growing problem for the newly formed Metropolitan Police Force. In 1840 the amount of crime offences had risen from 5000 to 20 000 in just 40 years. This was a problem that the police needed to tackle. There were more investigations launched towards the end of the 19th century and in the early 20th century. Investigations became more thorough and the CID was set up, this was short for the criminal intelligence department. Police work was improved a great deal during the late 19th century and which brought the crime rate down. The jobs of officers also changed throughout this period as police were not just there to deter crime and prevent it but they were there to solve crime. Police weren't liked very much in the 19th century and they had a bad reputation for handling incidents like protests. Through out this period as well punishments for crimes changed dramatically as capital punishment was abolished for most crimes, although it still stood for murder and treason, other means of punishments were introduced. Over all the police underwent very large changes in the way that they handled crime, the way that they punished people for crimes and the jobs of the police. Prisons also underwent large reforms; the conditions were foul and very inhumane. In 1829 the 'Metropolitan Police Force' was set up, the police officers were given blue uniforms as the older red ones reminded the public of the army and the general public felt intimidated by this. The uniform was designed so that it would look more civilian than it was military. The reason that the colour blue was chosen for the uniform was because it was the colour of the navy's uniform, the navy were very much liked and respected. ...read more.

Capital punishment, also know as the death penalty was the most common form of punishment before 1841, for anything stolen over the value of 25p, for murder, treason, stealing sheep, skipping hop wires and chopping down trees in Downing Street. In 1841 the only crimes that led to the death penalty were murder and treason. This was changed because juries were not convicting people of crimes because they did not feel that the death penalty was the right punishment. Many felt that being killed for stealing a loaf of bread was a little too harsh so many criminals got away. Also when a hanging took place it would attract many spectators, they would often turn up drunken and cause more trouble. There were often too many spectators for the police to handle. This made the police very unnerving and caused them to use the aggressive behavior that had given them the bad reputation that they had. It was also a way that the family and relatives could free the person on the death stand by mobbing the stage and there were a few cases that had people escape. Capital punishment had become as popular as going to the cinema is now. People would come in a happy frame of mind and cheer once that the person on the stand had been killed. There were often parties afterwards. People were now starting to think that the punishment should match the crime and not out weigh it. It was believed that harsh punishments would warn criminals off and that it would make them see that if they were to commit a crime then this is what was going to happen but it ended up doing the complete opposite. When the government saw that their methods were not working they decided to change punishments. The biggest punishment became transportation. This is when people were convicted of a crime and then gathered in jails awaiting their voyage. ...read more.

Children began to be treated differently under the 'juvenile offenses act 1847' it said that anyone aged 16 and under were to be tried in a new kind of court. The biggest change in Child Crime were Reformatory Schools where they were sent here for long periods of time meant to drag the children away from bad habits. Young offenders still usually began there sentences in an adult prison as the next three cases show: Thomas McCord Convicted of stealing a pigeon from the Market Hall. Sentenced to 1 month imprisonment Age: 15 Height: 4' 10" Dark brown hair Minnie Field Convicted of the theft of wearing apparel. Sentenced to 14 days imprisonment and to be sent to the Reform School for 5 years. Henry Newman Convicted of stealing a pigeon from the Market Hall. Sentenced to 1 month imprisonment Age: 16 Height: 5' 3" Brown hair In the early 19th century the job of the policeman was to prevent crime and not to solve it, nearing the end of the 19th century it became more solving and preventing. The new CID and guidelines underlining how an investigation and crime scene was to be dealt with, policing went through it's rough patches in the 1880's with baton charges but managed to pull through it. Policing gradually became better and more sophisticated and lead to what it is today. Street crime was on the decrease in the second half of the 19th century and burglaries which needed solving were on the increase, this is where the CID came in. Police in the 19th century was still very much in its infancy although had been around for almost a decade. Prisons came a long way in the late 19th century as well with many changes and reforms thanks to people like Elizabeth Fry. Punishments for crimes have come a long way as well; punishments were introduced to match the crimes and capital punishment abolished for over 200 crimes. Distinctions were made between children and adults and men and women and were treated accordingly. Daryl Levett 10.1 10FF ...read more.