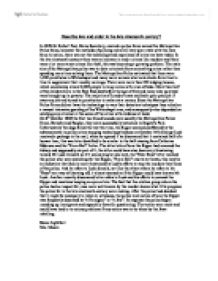 Describe law and order in the late nineteenth century?

Describe law and order in the late nineteenth century? In 1829 Sir Robert Peel, Home Secretary, created a police force named the Metropolitan Police force, however the methods of policing were still very poor even with this new force in action, there was not the technology and experience of crime we have today. In the late nineteenth century there was an increase in major crimes like murders and there were a lot more street crimes like theft, this was becoming a growing problem. The main aim of the Metropolitan police was to deter criminals from committing crime rather than spending more time solving them. The Metropolitan Police estimated that there were 1,200 prostitutes in Whitechapel and many more women who took clients from time to time to supplement their weekly earnings. ...read more.

intensive guarding of the Whitechapel area, and consequently also depended on catching any criminal at the scene of the crime with evidence at hand. On 9th October 1888 the first two blood hounds were used by the Metropolitan Police Force, Barnaby and Burgho, they were successfully tested out in Regent's Park. Unfortunately the dogs failed the test this time, the Ripper seemed unaffected by the advancements in police crime stopping technology because on October 16th George Lusk received a package in the mail, when he opened it he discovered that it contained half of a human liver, this was later identified to be similar to the half missing from Catherine Eddowes and the "From Hell" Letter. ...read more.

Another recently discovered letter refers to Lusk and his efforts to unmask the Ripper and mentions keeping an eye on him. The fact that the civilian group whom the police had no respect for, was more well known by the murder shows what little progress the police for in the late nineteenth century were making. After the police had decided that it might be necessary to listen to witnesses, the police took notice of how the Ripper was frequently described as "a Foreigner" or "a Jew". In response the police began rounding up immigrants and especially Jews for questioning. The tactics were racist and could have lead to to serious problems if any action was to be taken by the Jews rebelling. Shane Lightfoot Mrs. Mason ...read more.