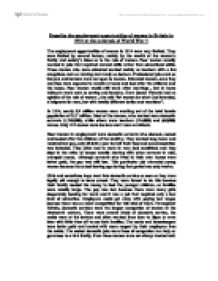 Describe the employment opportunities of women in Britain in 1914 at the outbreak of World War 1 The employment opportunities of women in 1914 were very limited. They were limited by several factors, mainly by the wealth of the woman's family and society's ideas as to the role of women. Poor women usually worked in jobs that required manual skills rather than educational skills. Those women who were educated worked mainly as teachers with a few exceptions such as nursing and rarely as doctors. Professional jobs such as lawyers and bankers were not open to women. Educated women, once they married, were expected to remain at home and look after the children and the house. Poor women would still work after marriage , but at home taking in work such as sewing and laundry. Even Queen Victoria had an opinion of the role of women , she said "let women be what God intended, a helpmate for man, but with totally different duties and vocations". In 1914, nearly 5.9 million women were working out of the total female population of 23.7 million. Most of the women, who worked were domestic servants (1,740,800), while others were teachers (124,000) and (68,000) nurses. Only 212 women were doctors and 2 were architects. Most women in employment were domestic servants who cleaned, cooked and looked after the children of the wealthy. They worked long hours and received low pay, only �5-�10 a year but all their food and accommodation was included. ...read more.

Some women worked at home and were paid 'piece rates', (this was in other words the amount they were paid for each piece they produced). Piece work was good only for the employers. These workers made fine goods like dresses, jewellery, hats, or even painted lead soldiers which was dangerous for their health. Some women worked in shops, particularly if their family owned the shop. In those days shop hours were not as long as today and while it would have been hard work it would have been pleasanter than being a servant. A few women worked in the professions, which were jobs for highly qualified women who generally had been to university. By 1914, at the outbreak of war, there were women working in a number of the professions, but only in small numbers. Women had been able to become doctors since the 1870's but by 1900 there were only 212 and this was only rising slowly . However, there was considerable resistance by men to such employment by women. The First World War gave women, especially women doctors a real opportunity for career development. Most work performed by women before 1914 was low skilled, low paid and involved little or no education in a world dominated and run by men. It was very difficult for women to be promoted. Many people simply thought that women were less capable than men. ...read more.

The clothing women usually wore in 1914 on the eve of the war would have made many jobs difficult. They wore long dresses and skirts reaching almost to the floor and rich women wore many petticoats under their skirts, long coats and hats and gloves. These clothes would have made it difficult for work in many jobs that men did and even for rushing to get a train to take them to an office in London or another city. Before the outbreak of World War 1 trousers were not considered proper or decent clothes for women to wear. Women were expected to be feminine and not dress like men. Clothing for women was much more comfortable and modern by the time the war ended because more practical clothes were necessary to do the work that men usually did. In conclusion, just prior to World War 1, the women's world of work was strictly limited by the factors outlines above , although opportunities had been slowly growing during the previous half century. Women had hoped to improve their lives by getting the right to vote. Groups like the Suffragettes had been demonstrating for years but the men who ran the country still refused to give them the vote. The War gave them an opportunity to improve their working lives in every way and particularly to prove to men they were capable of doing many jobs that had previously been reserved for men. ?? ?? ?? ?? ...read more.