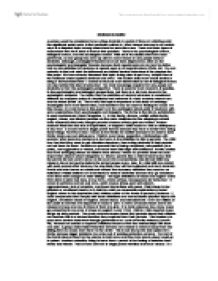 Deviance in Society A person would be considered to be acting deviantly in society if they are violating what the significant social norm in that particular culture is. What causes humans to act certain ways is a disputed topic among researchers for some time now. There are three types of researchers that have tried to answer this question. There is the psychological answer, biological answer, and the sociological answer. With all of the studies that have been performed, no one group has come up with an exact reason to why people behave deviantly. Although, sociologists' theories have not been disproved as often as the psychologists' and biologists' theories because their experiments are too hard to define and no one definition for deviance is agreed upon by all experimenters (Pfuhl, 40). My own curiosity to find out what the influences are behind deviant behaviour is the purpose for this paper. We have already discussed this topic during class in part two, chapter four of the textbook which explains deviance and crime. This section talks more about deviance being a learned behaviour. I wanted to find out more information to see if biological factors are also behind this kind of behaviour. The most knowledge acquired for why people act deviantly is from the sociological perspective. ...read more.

This hatred for a race is practiced over one hundred years ago. The idea that one race should be inferior and hate another race is something a person is not born with, and must have learned. Men are taught that the norm is to be aggressive, and even violent. What is normal can be relatively different in various areas of the world. Some may even accept harsher offences such as rape and murder. What is deviant can be changed over time once society as a whole feels more comfortable and accepting of the certain type of deviant behaviour. Only certain people once got tattoos and now it is a current fad to cover your whole body with them. Media portrays models and famous figures that get unusual tattoos, piercings, and have certain attitudes for people, mostly teenager, to follow. There are more devil-worshipers, or so they portray, in the music business. This says to children that it is cool to wear the black clothes and act somewhat gothic, like them. This is just one example. It may just depend on the person to how much their peers and media influence them to go against the norms. Although, once a person is labelled deviant they continue to respond to society as if they are. ...read more.

Sutherland demonstrates that criminal behaviour is learned from intimate groups by the means of communication. When they learn how to act deviantly they then know what is involved in what drives a person to commit a crime. This does vary in people who have different characteristics in concerns of how much a person will learn if they learn anything at all. This is the most popular among sociological theories because it has not yet been disproved. This is due to the enormity and difficulty measuring differential associations in one with criminal or non-criminal patterns. Whatever the cause is for deviant behaviour is, it is still a problem in society. Although, behaviour that was once thought of as deviant is no longer thought of in that way anymore. More people are starting to accept differences in people such as gays, tattoos, and piercings. It is even being taught to children that it is okay if they want to be different, or feel that they are because everyone is unique and should not be ashamed of that. The harsher acts of deviance are still looked extremely upon as horrid, and will hopefully never change. What causes a person to act a certain way is, the least to say a controversial topic. It may be from inherited traits, learned from society and family, or even a combination of both. In this case, an exact answer will probably never be known. ...read more.