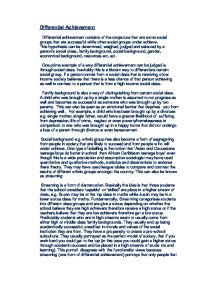 One prime example of a way differential achievement can be judged is through social class. Inevitably this is a blatant way to differentiate certain social group. If a person comes from a social class that is receiving a low income society believes that there is a less chance of that person achieving as well in contrast to a person that is from a high income social class.

Family background is also a way of distinguishing from certain social class. A child who was brought up by a single mother is assumed to not progress as well and becomes as successful as someone who was brought up by two parents.  This can also be seen as an emotional barrier that deprives you from achieving well.   For example, a child who has been brought up by a divorcee e.g. single mother, single father, would have a greater likelihood of suffering from depression, life of crime,  neglect or even poverty/homelessness in comparison to one who was brought up in a happy home that did not undergo a loss of a parent through divorce or even bereavement.

Social background e.g. ethnic group has also become a form of segregating from people in society that are likely to succeed and from people who will under achieve. One type of labelling is the notion that ‘Asian and Caucasians teenage boys do better in school than African Caribbean teenage boys’ even though this is a wide postulation and assumption sociologist may have used  quantitative and qualitative methods, statistics and observations to endorse there theory. They may have used league tables to compare and contrast the results of different ethnic groups amongst the country. This can also be known as streaming

Streaming is a form of demarcation. Basically the idea is that those students that the school considers ‘capable’ or ‘skilled’ are place in a higher stream of class, e.g. Suzan may be at the top class in maths while Justin may be in a lower status class for maths. Fundamentally, Streaming categorises students into different class groups and are give a status depending on whether the school believe they are high achievers therefore receive a high status or if the teachers believe that they are low achievers therefore get a low status. Predictably students who are in high streams seem to usually come from either high or middle class family backgrounds. They usually end up being academically successful, steadfast in morals and values of the social institution they are from. They have a propensity to create a pro-school subculture. They usually portrayed as the perfect model of society, that if you work hard you could get to the top (in this case you could gain a higher status through academic success and be placed in a high streams of students and learning). This portrait disagrees with the functionalist views because streaming (one form of differential achievement) portrays that only people that have been put in high streams can be better achievers than those that have not been put in high streams. Lots of Functionalists suppose that every one’s academic achievement rests completely upon that person's IQ. They also believe that society operates in a meritocratic system e.g. society works and operates like a human body, each aspects depends on each other in hopes of surviving; and that people work for what they achieve. While Differential achievement backs up the theory and thoughts brought forward by Marxists, that people from less affluent backgrounds are academically disadvantaged from the beginning.

Differential achievement theory could also presume that someone who attends a private school in contrast a public city school, or some that receives extra tuition and attends a school that have a great resources and facilities has a greater prospect achieving well in future.

The sociologist Angela McRobbie acknowledged the subsistence of “Bedroom Culture”. This means girls often condemn of boisterous mentality amongst fellow girls. However on average in education girls are said to do better than boys. One factor to consider while distinguishing between both genders in cases of streaming, and education is that it is said that girls take greater pride in their work compared to boys.

Primarily in terms of differential achievement, various reasons why middle-class citizens seem to achieve more academically than working class citizens may be because:

Dissimilarities in levels of educational accomplishment in our civilization can be given in details in terms of three essential categories:

In conclusion differential achievement claims that because the society different class can verify the result of a child’s education success dynamics like cultural and material depravation can lead to underachievement. This means that the working class children can not become as skilled as working class students because the materials they need are unavailable as they can’t afford them.

Thank you for reading;