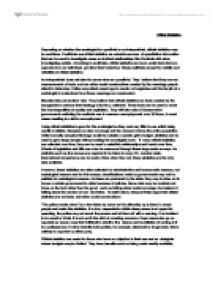 An interpretivist  does not take the same view as a positivist. They believe that they are not measurements of facts, and are rather social constructions created by the meanings people attach to behaviour. Police may attach meanings to murder or burglaries and it is the job of a sociologist to understand how those meanings are constructed.

Marxists take yet another view. They believe that official statistics are tools created by the bourgeoisie to enforce their ideology onto the proletariat. These tools can be used to mask the true inequalities of society and capitalism. They will take note of Conservative governments switching the methods use to measure unemployment over 30 times, in most cases resulting in a fall in unemployment.

Using official statistics is good for the sociologist as they cost very little to use whilst being readily available. Samples are also very large and the census involves the entire population; whilst normally samples this large wouild be outside a sociologist’s budget, statistics can be used to get a large sample without costing the sociologist much. If  many official statistics are collected over time, they can be used to establish relationships and trends over time. Effects of legislation and bills can also be measured through these large scale surveys. As statistics such as the census are required to be taken in every EU member state, international comparisons can be made. More often than not, these statistics are the only data available.

However, these statistics are often collected for administrative and beaurocratic reasons, not sociological reasons and for this reason, classifications made by governments may not be suitable for sociological reasons. As these are produced by the state, they may be biased to favour a certain government to reflect success of policies. Some data may be avoided and focus on the bad rather than the good, such as talking about social scroungez\rs instead of talking about the number of non-domiciles.  As said before, interpretivists argue that official statistics are not facts, but rather social constructions

“The police create crime” is a view taken by some as it is ultimately up to them to arrest people and make the statistics. If a nice, respectable middle class person is stopped for speeding, the police may not arrest the person and let them off with a warning. If an incident is too small or trivial, it is not worth the effot of arresting someone. Rape cases also go un-reported as women may find it difficult to admit to the shame and humiliation of owning to it to a policeperson. If crime benefits both parties, for example, blackmail or drugs trade, this is unlikely to reported by either party.

Official statistics are useful for those who have no objection to their use and sociologists whose budgets maybe limited. They have benefits such as being made readily available, and being cheap and in the public domain, but they can be subject to bias (how to categorise unemployed people changed three times in the eighties, with the number falling each time) and classifications for use with governments may have been objectionalised differently to how a sociologist would do so.