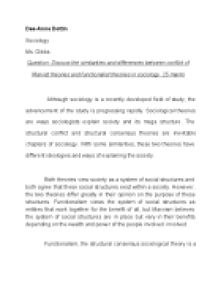 Discuss the similarities and differences between conflict of Marxist theories and functionalist theories in sociology.

﻿Dee-Anne Dottin Sociology Ms. Gibbs Question: Discuss the similarities and differences between conflict of Marxist theories and functionalist theories in sociology. 25 marks Although sociology is a recently developed field of study, the advancement of the study is progressing rapidly. Sociological theories are ways sociologists explain society and its mega structure. The structural conflict and structural consensus theories are inevitable chapters of sociology. With some similarities, these two theories have different ideologies and ways of explaining the society. Both theories view society as a system of social structures and both agree that these social structures exist within a society. However, the two theories differ greatly in their opinion on the purpose of these structures. Functionalism views the system of social structures as entities that work together for the benefit of all, but Marxism believes the system of social structures are in place but vary in their benefits depending on the wealth and power of the people involved. involved. Functionalism, the structural consensus sociological theory is a key theory that was developed by Emile Durkheim, one of the founding fathers of sociology. This theory sees society as a mega structure of inter-related social institutions such as schools and the legal system that is in constant consensus. ...read more.

The main ideologies of the structural consensus and structural conflict theory stand parallel to each other and can never come to an agreeing point. One of Functionalism?s key concepts is the collective conscience brought up by Emile Durkheim, which is defined as shared norms and valued in a society. Functionalists believe that collective conscious comes from socialization. Individuals learn what are the society?s expectations, values and norms from interacting with others. In contrast, Marxism spoke on the conflict of interest within the society itself. The bourgeoisie wants monopolization and more riches to themselves which will result in the tyrant exploitation of proletariats while the proletariats want more wages and fair working hours. To sum up, Functionalism spoke on how all individuals in society is in consensus with the social order and social rules whereas Marxism touches on the subject of how conflict is within the society. Another key concept in Functionalism and Marxism can be compared which is the theory of social equilibrium by Talcott Parsons and the theory of dialectical materialism by Joseph Dietzgen. In sociology, a system is said to be social equilibrium when there is a dynamic working balance among its interdependent parts. ...read more.

Both Marxism and Functionalism theories are macrospective. This means that the two theories look at society as a whole rather than looking at it from the individual point of view. Both Marxism and Functionalism look at the structures within a society such as family and education, and debate how these affect the individual instead of how the individual affects the structures. Similarly, both theories look at the overall structure of society and argue that education prepares pupils for their position in society whether it is an equal or unequal position. Seeing that these two theories are macro theories but the ideologies are a big contrast. Functionalism helps us understand how society is integrated to function as a whole. Marxism wakes us and gets us to understand more on the exploitations we are exposed to. Functionalism and Marxism are sociological perspectives that ask, and state, certain theories about society and the people that live within it. The two theories attempt to explain how society influences people, and similarly how people influence society. However, the two ideologies are distinctly different. They're so different in fact that only two similarities exist between the two theories.Without functionalism and Marxism, sociology would be very inadequate. ...read more.