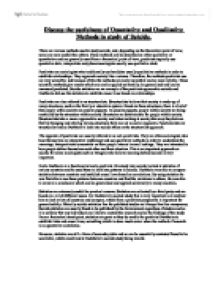 Discuss the usefulness of Quantative and Qualitative Methods in study of Suicide.

Discuss the usefulness of Quantative and Qualitative Methods in study of Suicide. There are various methods used to study suicide, and, depending on the theoretical point of view, some are more useful than others. These methods can be described as either qualitative or quantitative and are generally used from a theoretical point of view; positivists typically use quantative data, interpretists and phenomenologists usually use qualitative dada. Positivists are sociologists who traditionally use hard data usually qualitative methods in order to establish relationships. They approach society like a science. Therefore, the methods positivists use are very scientific, and because of this the methods are easily repeatable and so more reliable. These scientific methods give results which are can be applied universally, be generalised and lead to measured predicted. Suicide statistics are an example of the positivist approach to suicide and Durkheim did use the statistics to establish causal laws based on relationships. Positivists are also referred to as structuralists. Structuralists believe that society is made up of many structures, such as the family or education system. Based on these structures, there is a belief that people within society are passive puppets. As passive puppets, people within society are being controlled by the structures within society. Structures are deterministic for people within society. Structuralists take a macro approach to society and when looking at society this way they believe that by changing and altering various structures they can act as social engineers. ...read more.

The observations used, as well as typical observations, are too small and do not enable the results to be generalised. Atkinson only observed one coroners office and attended inquests in three towns. This also limits the reliability of Atkinson's overall findings because of the lack of reliability and validity of the method. The biggest problem, however, with observations is bias. Because a situation being observed is very subjective and it was just done by one sociologist (Atkinson), it makes the findings less reliable. Atkinson also interviewed coroners and families as a method of gaining research; but the big problem with that was a potential lack of validity. Interviews from an interpretist perspective may not always address the issues which the sociologist is trying to address; this is particularly a problem when interviewing a family about suicide as they can easily mention information which is not relevant. Interviewing a family after a suicide is also highly unethical. It usually involves asking family members highly personal questions regarding the deceased and bringing up very emotional topics. When interviewing someone face to face there are interviewer effects which translate to the interviewee and can affect the answers they gave. This makes the qualitative method less reliable. Using his methods, however, Atkinson was able to come to sound conclusions regarding the compilation of suicide statistics. He found that an actual rate of suicide didn't exist or that suicide existed as an objective fact. ...read more.

Regardless of that, he found 17 cases which resulted in suicide. Taylor's examples of supposed suicide perfectly demonstrate the point Atkinson makes regarding the subjective decision the coroner makes. Taylor's study backs up the work Atkinson did on the composition of suicide statistics and is a good critique of the quantative method of suicide. The main quantative method used to look into suicide is statistics; and this method has been highly criticised by those sociologists who looked into suicide used qualitative methods. Interpretists and phenomonolgists argue that statistics are a quantative method for studying suicide which is essentially subjective, but, they methods they used to back this theory up are qualitative and therefore also subjective. Therefore, although Durkheim's study is the most highly criticised of the three, it still has meaning and importance today when looking into suicide. This is regardless of the method used because his conclusions have been backed up by Gibbs and Martin who did agree that with Durkheim that social integration plays an important part in suicide. However, Durkheim's look into suicide cannot be deemed successful just on it's own, a look into suicide with the prospect of fixing the problem also requires an interpretist view and a look into how suicide statistics are formed is needed in order to make the statistics as valid as possible. Therefore, it is clear that a range of qualitative and quantative methods are need to understand the nature of suicide and stop it. ...read more.