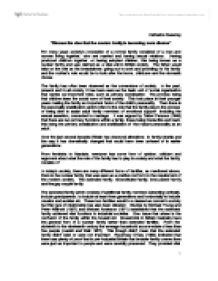 Catherine Sweeney "Discuss the view that the modern family is becoming more diverse" For many years society's conception of a normal family consisted of a man and women living together, who are married and having s****l relations. Having produced children together, or having adopted children, this being known as a nuclear family and was claimed as a vital unit in British society. The father would take on the role as the breadwinner; going out to work and providing for his family and the mother's role would be to look after the home, childcare and the domestic chores. The family has often been observed as the cornerstone of society. In the past, present and in all society, it has been seen as the basic unit of social organisation that carries out important roles, such as primary socialisation. The process being that children learn the social norm of their society. This took place in their younger years making the family an important factor of the child's personality. Then there is the personality stabilization which refers to the role that the family play in the process of being able to assist adult family members of emotional support including the s****l assertion, connected to marriage. It was argued by Talbot Parsons (1949) that there are two primary functions within a family, these being irreducible and basic this being the primary socialisation and stabilisation of the mature personality as an adult. ...read more.

Behavioural problems really manifest from an absent father though? Rodger (1996) looked at many various options. The key not being that of an absent father but if they have an active role in a child's upbringing. This also applies to single and nuclear family. Children in single parent families may be disturbed and cause behavioural problems because of the emotional disruption caused by separation and divorce. Finally, we have the gay couple family which is a relationship formed between two same s*x persons, with a biological child / children. In 2004 the UK's Civil Partnership Act came into force now allowing civil partnerships between and lesbian and gay couples. The gay couple has also been known as "families of choice" to represent the positive forms of every day life that h********l couples are able to conduct together that wasn't available in earlier years. The many traditional attributes applied to the nuclear family are now being resumed by gay couples. For many people, the family unit provides comfort, love, security, emotion and companionship. Yet it can also be regarded as loneliness, exploitation and inequality. If the current incline over the last half a century remain, then parents of the future will no longer marry and have less children. The number of children in non-married families has trebled in the last 50 years to around 40%, according to figures from the Office for National Statistics, while the average number of children has decreased from 2.2 to 1.8 per family - which are continuing increasingly rapidly in societies' future. ...read more.