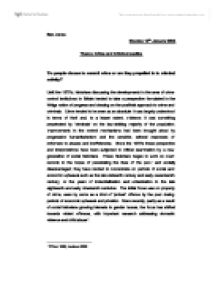 Do people choose to commit crime or are they propelled in to criminal activity?'

Ben Jones Monday 12th January 2004 Theory, Crime and Criminal Justice 'Do people choose to commit crime or are they propelled in to criminal activity?' Until the 1970's, historians discussing the developments in the area of crime control institutions in Britain tended to take a perspective formulated in the Whigs notion of progress and drawing on the positivist approach to crime and criminals. Crime tended to be seen as an absolute: it was largely understood in terms of theft and, to a lesser extent, violence; it was something perpetrated by 'criminals' on the law-abiding majority of the population. Improvements in the control mechanisms had been brought about by progressive humanitarianism and the sensible, rational responses of reformers to abuses and inefficiencies. Since the 1970's these perspective and interpretations have been subjected to critical examination by a new generation of social historians. These historians began to work on court records in the hopes of penetrating the lives of the poor and socially disadvantaged; they have tended to concentrate on periods of social and economic upheaval such as the late sixteenth century and early seventeenth century, or the years of industrialization and urbanization in the late eighteenth and early nineteenth centuries. The initial focus was on property of crime, seen by some as a kind of 'protest' offence by the poor during periods of economic upheaval and privation. More recently, partly as a result of social historians growing interests in gender issues, the focus has shifted towards violent offences, with important research addressing domestic violence and child abuse1. ...read more.

Here a deformed servant's morality is as offensive as his appearance. Even in present day situations, although it may be perceived as s****t, a beautiful woman is not expected to commit crime, it shows physical features and behaviour has a less than scientific connection. Positivist during this period neglected the idea that social factors external to the individual play a part in criminal behaviour. Positivist thinking became popular through the work of Caesar Lombroso who is often associated with Modern Day Criminology. Lombroso was very scientific and disciplined and described himself as a slave to facts. Between the time Beccaria (classical school) graduation and Lombroso's from the University of Pavia, secular, rational and scientific thinking and experimentation became more acceptable to analyse reality, instead of more spiritualist ways of thinking. With Lombroso's degree in medicine he worked as a medical officer in the army. During this time, 1859 - 63, Lombroso held that criminals had a peculiar physical type, distinctly different from non-criminals and from this he derived that criminals had not evolved as quickly. Though this thinking Lombroso developed four categories: 1. Born Criminals - atavistic characteristics. 2. Insane Criminals - idiots, imbeciles, paranoiacs, epileptics and alcoholics. 3. Criminaloids - opportunistic criminals, and 4. Criminals of Passion - where a crime is committed through love, hate or any emotion, Yet his studies concluded that physical features could define criminals. After further scientific study these theories were dismissed. ...read more.

I conclude from my studies that criminals do have a choice before they commit a criminal act, yet the decision made is based on years of learning and evolving to the environment around the person. Therefore when children are brought up in the slums of their society, broken homes (single parent families), poor education and abusive parents there is a greater likelihood that the child may participate in criminal activity later on in life. Whereas children who are brought up in wealthy families, tend to receive better education and generally better standards of living, and in turn will usually not resort to criminal activity. There are many criticisms that can be made with the theories. Many of them are said to reduce or even deny the role of free will and choice in guiding human action. Crime is generally over predicted, in that only a relatively small number of people who are exposed to criminogenic influences or pressures go on to become persistent offenders. The question then arises as to whether a theory is shown not to have general applicability is automatically invalid. In fact given the wide range of behaviour that is considered anti-social or criminal, it is hardly surprising that the search for the overall answer to whether an individual chooses to commit a crime or are they propelled in to criminal activity is proving elusive. It is important to bear in mind that these theories are not useless because they are not all embracing when considering the diversity of crime. They explore avenues that are interesting for discussion and provide a fascinating insight in to reasons behind criminal activity. ...read more.