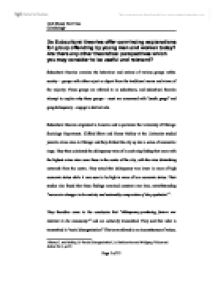 Do Subcultural theories offer convincing explanations for group offending by young men and women today? Are there any other theoretical perspectives which you may consider to be useful and relevant?

Do Subcultural theories offer convincing explanations for group offending by young men and women today? Are there any other theoretical perspectives which you may consider to be useful and relevant? Subcultural theories examine the behaviour and actions of various groups within society - groups with either reject or depart from the traditional norms and views of the majority. These groups are referred to as subcultures, and subcultural theories attempt to explain why these groups - most are concerned with "youth gangs" and gang delinquency - engage in deviant acts. Subcultural theories originated in America and in particular the Univeristy of Chicago Sociology Department. Clifford Shaw and Henry McKay at the University studied juvenile crime rates in Chicago and they divided the city up into a series of concentric rings. They then calculated the delinquency rates of in each ring finding that areas with the highest crime rates were those in the centre of the city, with the rates diminishing outwards from the centre. They noted that delinquency was lower in areas of high economic status while it was seen to be high in areas of low economic status. Their studies also found that these findings remained constant over time, notwithstanding "successive changes in the nativity and nationality composition of the population"1. They therefore came to the conclusion that "delinquency-producing factors are inherent in the community"2 and are culturally transmitted. They said that what is transmitted is "social disorganisation" This term referred to an inconsistency of values, attitudes and standards of behaviour. ...read more.

from the fact that it provides a means of securing economic gain, prestige, and other human satisfactions and is embodied in delinquent groups and criminal organizations, many of which have great influence, power and prestige"13. Children are exposed to these values as they are transmitted and passed down from generation to generation as are the techniques for committing offences. In discussing this, Shaw and Mckay give examples of the types of offences whose techniques are passed down, such as jack-rolling and shoplifting - crimes which lack a purpose. They strongly emphasise the role of the peer group and they say that in the context of this group crime is regarded as normal, as from the viewpoint of the delinquent's immediate social world (the subculture) and the norms associated with that world, he is not necessarily "disorganised, maladjusted or antisocial" but may be highly organized and well-adjusted14. Cohen's explanation of juveniles turning to crime centred upon their frustration at being unable to achieve "middle class" success and, more specifically, success at school. He says that in the resulting delinquent subculture, delinquents respond as a group and that this response has been worked out by their group over many years. This response is to "invert" the norms of wider society with the result that the subcultures' activities are, as mentioned earlier, non-utilitarian, malicious and negativistic. Indeed, these descriptions of the groups' activities explain crimes such as shoplifting (which is non-utilitarian) and vandalism (which is malicious) rather well. Cohen himself says that much gang stealing has no motivation and is in fact stealing "for the hell of it" and is a "valued activity to which attaches glory, prowess and profound satisfaction"15 rather than as an activity for gain and profit. ...read more.