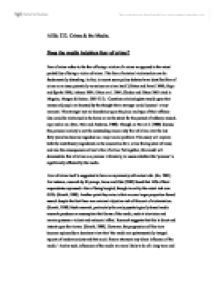 Does the media heighten fear of crime?

ASSc 322. Crime & the Media. Does the media heighten fear of crime? Fear of crime refers to the fear of being a victim of a crime as opposed to the actual probability of being a victim of crime. This fear of criminal victimisation can be fundamentally disturbing. In fact, in recent years policy debates have identified fear of crime as an issue potentially as serious as crime itself. (Ditton and Farrell 2000; Hope and Sparks 2000; Jackson 2004, Ditton et al. 2004; Chadee and Ditton 2005 cited in Maguire, Morgan & Reiner, 2007:321). Countless criminologists would agree that masses of people are haunted by the thought that a stranger could 'pounce' at any moment. This stranger lays no boundaries upon the place and type of their offence: One could be victimised in the home or on the street for the pursuit of robbery, assault, rape and so on. (Box, Hale and Andrews, 1988). Though, as Box et al (1988) discuss, this personal anxiety is not the outstanding reason why fear of crime over the last forty years has become regarded as a major social problem: This essay will explore both the contributory ingredients in the concoction for a crime fearing state of mind, and also the consequences of one's fear of crime. Put together, this model will demonstrate fear of crime as a process: Ultimately, to assess whether this 'process' is significantly affected by the media. Fear of crime itself is suggested to have an asymmetry with actual risk. (Ito, 1993). For instance, research by Kiyonaga, Inoue and Oda (1990) found that 54% of their respondents expressed a fear of being burgled, though in reality the actual risk was 0.9%. (Howitt, 1998). Another point they raise is that an even larger proportion feared assault despite the fact there was minimal objective risk of this sort of victimisation. (Howitt, 1998) Much research, particularly the early psychologically based media research produces an assumption that forms of the media, such at television and movies possess a violent and antisocial affect. ...read more.

Chandler argues that such factors all contribute to shape the ways in which television is interpreted by individual. 'When the viewer has some direct lived experience of the subject matter this may tend to reduce any cultivation effect'. There also appears to be evidence that the lower socio-economic groups have a tendency to use television as a source of information more so than other groups. Having said this, Chandler highlights that the viewer's framing of television 'reality' also must be considered. For it is often argued that it is possible that cultivation is enhanced when the person viewing interprets the content as reality. Another social variable to consider is ethnic minorities. Chandler stated that ethnic minorities exhibit more sophistication in 'perceived reality' than others do (This is a subject van Evra 1990 expands much more thoroughly upon). In addition, evidence suggests that working class mothers are more likely to acquire a perceived reality of programmes which offer a negative depictions of undesirable behaviour so as to discourage such behaviour. Chandler collated some very relevant points in considering the affects of the media and the actual fear of crime. Hirsch (1980) also argued that the noticed relationship between the viewing of violence on television and fear of crime may be explained by the particular demographics of an individual. For instance, Hirschi highlights that people living within areas of high crime rate may be more likely spend more time indoors at their own home watching television. Furthermore this combines with the geographically specific notion that they have a greater chance of being a victim of crime compared to people living in a lower crime area. It is argued that Gerbner's theory of cultivation brings not enough attention to the point that the frequent and less frequent television viewers do vary in other ways than said viewing habbits. For example, age, gender and social class. (Hirschi (1980) ...read more.

It seems unfortunate that despite copious amounts of literature on media effects on crime, little material has been produced regarding how representations of crime circulate within society. There is little material on how these representations are transmitted and perhaps manipulated by the media. Limited discussion on such effects which in certain theory produces personal fear of crime. It seems the individual's fear of crime resides somewhere along a 'production line', which ofcouse is different for every person: Where one individuals fear has been produces through knowledge of a friend's victimisation, another's may have come through the same but also some form of media knowledge. In other words, there are many ways to bake a cake! Our attitudes are likely to be influenced not just by TV, but also through other forms of media, through direct experience, through the word-of-mouth, and so on: It is not accurate to pin point a specific formula for the production of a crime fearing individual since it happens in all different ways: And so, as with most criminological issues one cannot really specialise a concrete yes or no in consindering whether the media does heightens fear of crime. Rather, and to adapt those useful words of Heath and Gordon (1996), the title to this question would have a more specific answer had it been worded 'Does some of the media affect some people some of the time?' I would say yes, 3,500 times. Evidence of a theoretical or statistical basis thus far will not suffice to make a more accute summary. It remains possible that study in the future may take account of the production lines through which representations, beliefs and attitudes about fear of crime are propagated in different social and cultural contexts. Only then would it be valid to make a sharper generalisation. As it stands, Heath and Gordon got the right sentence. Some people, some of the time. ...read more.