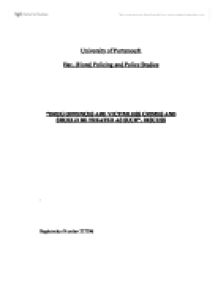 &quot;DRUG OFFENCES ARE VICTIMLESS CRIMES AND SHOULD BE TREATED AS SUCH&quot;. DISCUSS

University of Portsmouth Bsc. (Hons) Policing and Police Studies "DRUG OFFENCES ARE VICTIMLESS CRIMES AND SHOULD BE TREATED AS SUCH". DISCUSS . Registration Number 227296 The UK Parliament announced in May 2002 that 'There are no easy answers to the problems posed by drug abuse, but it seems to us that certain trends are unmistakable. If there is any single lesson from the experience of the last 30 years, it is that policies based wholly or mainly on enforcement are destined to fail. It remains an unhappy fact that the best efforts of police and Customs have had little, if any, impact on the availability of illegal drugs and this is reflected in the prices on the street which are as low as they have ever been. The best that can be said, and the evidence for this is shaky, is that we have succeeded in containing the problem'. The 2001/2002 British Crime Survey estimates that 34% of 16 to 59 year-olds have used an illicit drug at some time and 12% have used a Class 'A' drug1. Along with abortion, prostitution, homosexuality, drug misuse is often referred to as a 'victimless' crime. It will be the intention of this paper to brief the Chief Constable concerning a critical policing issue, namely the use of controlled drugs. ...read more.

This thinking presumes that both sides of the 'British System' are dealing with different people. This is not the case. It was found that drug counsellors and doctors encourage users to come forward to receive treatment. Whilst the criminal justice system was processing increasing numbers of drugs offenders through police stations and the courts. Collison criticises the latter process here as it was shown that the two parts were frequently dealing with the same person (Collison 1993 ibid). The total value of the UK drugs market has been estimated at 6,613.54 million pounds sterling. These figures include the use by regular, occasional and prison users in the UK population aged between 16 and 59 years. However, a proportion of those who use illegal drugs have serious problems of dependency, and they need substantial sums of money to finance their drug use. This can run to several hundred pounds a week for dependent heroin users, and higher figures still have been reported for some crack users. Bramley-Harker found of all the crack users in his study, 40 per cent were using crack on a daily basis and 2 daily users (1.9%) had weekly expenditures in excess of �2,000. The relationship between crime and drug use is complex. ...read more.

Drug dependants, whose needs are exploited by suppliers, are victims. Those 'third party' members of the community who suffer the acquisition crime needed to feed these habits are victims. It can also be said that the increased financial outgoings taken from taxpaying families makes them victims. The socio- economic cost is estimated to be more than twelve billion pounds, it is continually said that 'the use of Class A drugs in the last year among 16- to 24-year-olds has not changed significantly since 1994' (British Crime Survey 2002). I would like to see a shift in policy from a focused detection model to one that invests the huge sums of money currently spent more effectively. Such enforcement methods can tend to alienate the police and other partners from the community, who need their help. The introduction of Drug Action Teams and more referral schemes will help treat the social problems attached to drugs use. In closing I would like to see drug offences treated as victim centred crimes, rather than as victimless offences. Law enforcement efforts should be concentrated at an international and organised crime, thus allowing other community partners to lead a multi agency approach at the local level. This may offer the community greater value for money in assisting the third party victims of drugs crime and at the same time helping the social victims who are the users. ...read more.