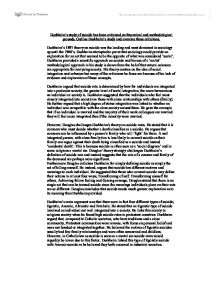 Durkheim's study of suicide has been criticised on theoretical and methodological grounds. Outline Durkheim's study and examine these criticisms. Durkheim's 1897 theory on suicide was the leading and most dominant in sociology up until the 1960's. Durkheim attempted to prove that sociology could provide an explanation for an act that seemed to be the opposite of what was considered 'social'. Durkheim provided a scientific approach on suicide and his use of a 'realist' methodological approach in his study is drawn from the belief that natural sciences are appropriate for analysing society. His theory centres on the idea of social integration and cohesion but many of the criticisms he faces are because of his lack of evidence and exploration of these concepts. Durkheim argued that suicide rate is determined by how far individuals are integrated into a particular society, the greater level of social integration, the more harmonious an individual or society is. Durkheim suggested that the individuals who feel most closely integrated into society are those with close relationships with others (family). He further argued that a high degree of status integration was linked to whether an individual was compatible with the close society around them. He gave the example that if an individual is married and the majority of their work colleagues are married they will feel more integrated than if the minority were married. However, Douglas challenges Durkheim's theory on suicide rates. ...read more.

Durkheim defined Anomic suicide as how well a society neglects an individual. He stated that when the social norms and values were disruptive and social change occurred, (Anomie) suicide rate increased. Durkheim's final two types of suicide can be linked in that they are more likely to occur in Pre-industrial society. Durkheim stated that Altruistic suicide occurred when a well-integrated individual sacrificed their live for others, or self sacrifice for a cause. An example of this would be a suicide bomber. Finally, Fatalistic suicide was when an individual's life was too controlled; Durkheim stated that it was "suicide of persons pitifully blocked". However, functionalist sociologist Halburach mainly supported Durkheim's theory but disagreed with the view of religious significance. He found the differences between Urban and Rural areas more important. Halburach found that suicide rates were higher in urban areas, especially in the holidays. Additionally, Gibbs and Martin criticised Durkheim for not properly defining the concept of integration and they objected to the idea that integration could be measured. Furthermore, like Durkheim, Taylor had his own theory of types of suicide. The four types included Submissive, Thamatation, Sacrifice and Appeal suicide. Taylor argued that Submissive suicide was when a person who is certain their life is over, (e.g. terminal illness) and chooses to commit suicide to end their physical suffering. ...read more.

Therefore, Atkinson instead argued that suicide was an interpretation of a situation that is interpreted (by the coroner) in a certain way. Furthermore, Atkinson believed that Durkheim had failed to understand suicide as a social construct. He argued that before a death can be classified as suicide, a coroner must carry out an inquest and on the basis of this, the death is classified as suicide or not. Atkinson argued that the official statistics therefore reflect coroners' decisions rather than any underlying reality. Overall, Durkheim's main argument centres around the basis that suicide rate is determined by how well integrated a person is, with an individual who is less well integrated more likely to attempt or commit suicide than a person who has close ties with society. However, Durkheim faces many criticisms, in particular from Interpretivist sociologists who argue that his analysis of suicide depends upon the concept of social integration and cohesion but never truly provides a clear, set definition of it, nor is there any obvious method of measuring it. Durkheim's theory however, is fundamental to the sociological understanding of suicide and should not be altogether dismissed although it is clear he has little methodological or theoretical evidence as he relies heavily on official statistics. Both Douglas' and Atkinson's criticisms are valid and their approaches support the development of the sociological study of suicide, but I believe Durkheim's study on suicide is fundamental to the understanding of the sociology of suicide. By Hannah Page ...read more.