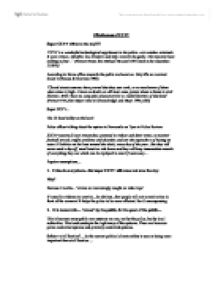 Effectiveness of CCTV Super-CCTV will save the day??? 'CCTV is a wonderful technological supplement to the police...cctv catches criminals. It spots crimes, identifies law breakers and helps convict the guilty. The innocent have nothing to fear...' (Former Home Sec Michael Howard 1995 cited in the Guardian 21/9/95) According to Home office research the public are keen too. Only 6% are worried about it (Honess & Charman 1992) 'Closed circuit cameras have proved that they can work, so we need more of them when crime is high...I have no doubt we will hear some protest about a threat to civil liberties. Well I have no sympathy whatsoever for so-called liberties of that kind' (Former PM John Major cited in Groombridge and Murji 1994 p283) Super CCTV... The 24 hour bobby on the beat! Police officer talking about the system in Newcastle on Tyne in Police Review: [CCTV cameras] have tremendous potential to reduce and deter crime, to monitor football crowds, traffic problems and disorder, and are the equivalent of having an extra 16 bobbies on the beat around the clock, every day of the year...But they will never need a day off, meal break or sick leave and they will keep immaculate records of everything they see which can be replayed in court if necessary.... ...read more.

This is why most of the CCTV footage that we see on programmes such as Crimewatch is blurred and of poor quality. Video enhancement for pictures that are potentially going to be used for the purpose of evidence is also highly problematic, because it may change the appearance of the subject, and for this reason is not usually undertaken. The problems of public expectations? 'You feel a lot safer especially walking home as I do in the late evening and you know that someone is watching if anything may happen and would be at the scene in a matter of minutes' (Lincoln City centre retailer). Problem:....you can't have cameras everywhere? 'The system has blind spots. Our offices were burgled by thieves who gained access at a point not covered by the cameras. (Lincoln City centre retailer) What if it appears to fail? 'Two large windows have been smashed in Guildhall street in the last month, are there enough people monitoring the system at the right times?' (Lincoln City centre retailer) The problem is that you have a contradiction that is not easy to resolve. You need the potential 'criminals' to believe that it is all encompassing, but you need the 'public' to be realistic about what it can achieve. ...read more.

On the other hand, those that do not conform to the acceptable stereotype - the 'new marginals' are increasingly being told...that they are not welcome being .......'denied access, based upon the flimsiest of judgements and reasoning by security guards (private armies who ensure that retailers conform and shoppers behave.(Shields 1992 cited in Beck & Willis 1995:119-120) But the 'innocent', whoever they are, have nothing to fear because the camera never lies: Beck and Willis (1995) Crime and Security: Managing the risk to safe shopping. Perpetuity Press. Leicester. Brown, B. (1995) CCTV in Town Centres; 3 case studies. Crime detection and prevention series: Police Research Group. Dawson, T (1994) 'Framing the villains' in , T (1994) 'Framing the villains' in New Statesman and Society 28/1/94 Graham, Brooks & Heery (1996) Towns on the Television: Closed Circuit TV In British Towns and Cities. Paper prepared for conference on CCTV, Surveillance and Social Control, at University of Hull. Groombridge, N. & K. Murji (1994) 'As easy as AB and CCTV?' in Policing Vol.10 No.4 Winter. Honess & Charman (1992) Closed Circuit Television in Public Places: Its acceptability and perceived effectiveness. London: Home Office Police Department. Norris, C. G. Armstrong & J. Moran (eds) (1998) Closed circuit TV and Social Control Aldershot, Ashgate. Norris, C. & G Armstrong (1999) The maximum surveillance society London. Berg. ...read more.