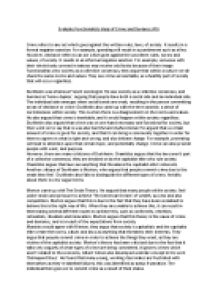 Transfer-Encoding: chunked ﻿Evaluate Functionalists ideas of Crime and Deviance (45) Crime refers to any act which goes against the written rules, laws, of society. It results in a formal negative sanction. For example, speeding will result in a punishment such as a fine. However, deviance refers to an act which goes against the unwritten rules, norms and values, of society. It results in an informal negative sanction. For example, someone with their whole body covered in tattoos may receive odd looks because of their image. Functionalists view society as a collective consensus, they argue that within a culture we all share the same norms and values. They see crime as inevitable, as a healthy part of society that will occur regardless. Durkheim was a famous French sociologist. He saw society as a collective consensus, and humans as ?h**o duplex?, arguing that people have both a social side and an individual side. ...read more.

Merton argues that this is due to the fact that they have been socialised to believe this is the right way of life. When they are unable to achieve this, it can result in them taking several different routes to achieve this, such as conformity, rebellion, retreatism, ritualism and innovation. Merton argues that this theory is the cause of crime and deviance, and is a result of the expectations from society. Marxists would agree with Merton, they argue that society is capitalistic and the capitalist elite create the norms, values and laws as anything that threatens their interests. They argue that people commit crime in order to achieve the things they want, as they are victims of the capitalist society. Merton?s theory has been criticised due to the fact that it talks very vaguely of what types of crime are being committed, it ignores crimes which aren?t related to the economy. ...read more.

Postmodernists would argue that society is so diverse, that no such thing as a collective consensus could exist. They also ignore individual motives, and focus on society as a whole, ignoring any subcultures that exist. Marxists would argue that functionalists ignore the concept of power when discussing ideas surrounding crime and deviance, Marxists would argue that power has a large impact on the reasons behind why people commit criminal and deviant acts. Interactionists suggest that crime depends on an individual?s relationship to crime, and they argue whether it is functional for society or not. Marxists and Feminists also argue that they focus to much on the positive functions crime has for society, such as providing people with work and purpose, and bringing the community together. They argue that functionalists ignore the negative impacts crime can have on people, how is crime beneficial for the victim? On the whole, the functionalist system has more criticisms than strengths, yet provides us with a detailed argument surrounding the reasons why criminal and deviant acts are committed within our society. ...read more.