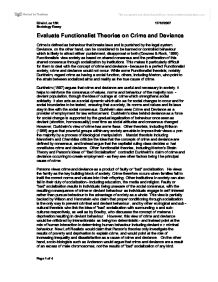 Evaluate Functionalist Theories on Crime and Deviance Crime is defined as behaviour that breaks laws and is punished by the legal system. Deviance, on the other hand, can be considered to be banned or controlled behaviour which is likely to attract either punishment, disapproval or both (Downes & Rock, 1988). Functionalists view society as based on shared consensus and the proliferation of this shared consensus through socialization by institutions. This makes it particularly difficult for them to deal with the concept of crime and deviance- because in a perfect Functionalist society, crime and deviance would not occur. While some Functionalist theorists, notably Durkheim, regard crime as having a social function, others, including Merton, who point to the strain between socialized aims and reality as the true cause of crime. Durkheim (1897) argues that crime and deviance are useful and necessary in society. It helps to reinforce the consensus of values, norms and behaviour of the majority non-deviant population, through the idea of outrage at crime which strengthens social solidarity. It also acts as a social dynamic which allows for social changes to occur and for social boundaries to be tested, ensuring that a society, its norms and values and its laws stay in line with the social consensus. Durkheim also sees Crime and Deviance as a provider of employment for law enforcement. ...read more.

Furthermore, it could be argued that Cohen's theory is at the very least quite deterministic- mainly due to its assumption that boys from working-class and lower socioeconomic groups were invariably destined to fail within the educational system. This point fades in credibility when we take into account that a good proportion of boys from working-class backgrounds have managed to avoid being pulled into the cycle of deviance and crime. Matza, in "Delinquency and Drift" (1964) argues that deviants do not necessarily reject the wider values and norms of society. He puts forward the idea of a dual-value system in which conventional and subterranean values exist side-by-side, with a conflict between the two varying value systems. This results in a form of normative confusion, especially in the period of transition between childhood and adulthood- resulting in a corresponding rise in deviant behaviour, followed by a settlement back into normal behaviour once the period of confusion has run its course. This explains the reasons behind youth 'delinquency' and deviance. However, Interactionists would argue that Matza's theories do not actually reflect the truth- as some do not fall into the cycle of deviant behaviour caused by the conflict between subterranean and conventional values. They would also criticize the assumption that deviant behaviour is caused by the influence of a 'value system', instead emphasising the role of human interaction and the learning process behind this as an alternative reason behind youth deviance and delinquency. ...read more.

Functionalist theories also glaringly ignore the concept of "power" in defining the idea of what "crime" and "deviant behaviour", opting instead to consign this to a so-called "consensus". Marxists would instead point to the idea of crime being classified as crime by those in power- the Capitalist Ruling Class, for their own economic and political advantage. The "high rate of working-class delinquency" cited by both Matza and Miller and used as a basis for their studies is perhaps a result of either over-policing, which itself can be seen by Interactionists as policing according to public perceptions/demands, or by Marxists as a form of oppression. In conclusion, it can be said that although Functionalist theories do indeed go a long way in explaining the reasons for Crime and Deviance, they do leave a lot to be desired- mainly through failing to take into account the concept of power in relation to crimes and law-making, and their overly deterministic view of society and the manner in which it shapes and forms human behaviour. However, it should be said that Functionalist theories are useful in explaining crime and deviance- perhaps with the use of other complimentary theories or triangulation and methodological pluralism to balance out the clear problems and challenges associated with Functionalist theory. ?? ?? ?? ?? Edwin Loo 13K 17/10/2007 Sociology Essay Page 4 of 4 ...read more.