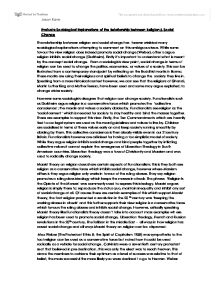 Evaluate Sociological Explanations of the Relationship between Religion & Social Change The relationship between religion and social change has forever wielded many sociological explanations attempting to comment on this ambiguous issue. While some favour the view religion does indeed promote social change (Weber), others argue religion inhibits social change (Durkheim). Firstly it's important to understand what is meant by the concept social change. From a sociologists view point, social change in terms of religion can be used to change the politics, economics, or values of a society. This can be illustrated from a contemporary standpoint by reflecting on the Buddhist monks in Burma. These monks are using their religious and spiritual beliefs to change the society they live in. Speaking from a more historical context however, we can see that the religions of Ghandi, Martin Luther King and Mother Teresa, have been used and some may argue exploited; to change wider society. ...read more.

Of course there are certain examples of this which support Marxist theory, the fact religion prevented a revolution in the 20th century was 'keeping the working classes in check' and this further supports their view religion is a conservative force which favours the ruling classes and inhibits social change. However, critically speaking Marxist theory like Functionalists theory doesn't take into account mass examples where religion has been used to promote social change, Liberation theology, French and Russian revolutions in the 20th century, The Taliban in the middle East - all ways in how religion has cased social change and all ways Marxist theory on religion can be disproved. Max Weber (The Protestant Ethic & the Spirit of Capitalism 1958) was sympathetic to the fact religion can be used as a conservative force but noted how it could be used radically as a vehicle for social change. Calvinists were a seventieth century protestant sect that believed in pre destination, this was only the elect was to reach heaven. ...read more.

a way they can justify, this can therefore lead to sociologists questioning the nature of the social change, and whether it can be tightly tied to religion may be hard to measure. Finally post modernists see religion as an indicator in social change arguing the change in religion reflects the shift from modernity to post modernity. Post modernists see society in constant change where there are no absolute truths, the decline in rationalism and growth of religious pluralism undermine the traditional community dimension of religion. They see the very rise of post modernity the resurgence of religion and the many ways some religions can be conservative or radial based on culture or location. The relationship between religion and social change has forever been of great sociological debate but with the emergence of post modernism and the many new religions forming it compels us to contemplate new definitions of religion, most of which contribute a radical or conservative force in society either inhibiting or promoting social change ?? ?? ?? ?? Jason Kane ...read more.

The writer definitely answers the specific question asked, as they explain how religion can be viewed as both a conservative force and as a radical force for social change. By referring to both arguments, lots of evaluative points can be ...

The writer definitely answers the specific question asked, as they explain how religion can be viewed as both a conservative force and as a radical force for social change. By referring to both arguments, lots of evaluative points can be awarded, which is actually what the majority of marks in sociology are given for. Most candidates tend to forget that they need to continually evaluate; instead lots of people only write about sociological theories in a list fashion, which examiners hate. This essay is well structured, with an apt introduction and conclusion, which will get them a decent grade.

This candidate clearly has a good all round academic knowledge, but occasionally they make a few mistakes that although seem minor, are actually vital to get right in order to gain more marks. An example that jumps out at me is: Ã¢â‚¬Å“Calvinists were a seventieth century protestant sectÃ¢â‚¬Â, as it was a seventeenth century sect. I would also argue that the candidate needs to specifically explain liberation theology further Ã¢â‚¬â€œ as it massively contributed to social change Ã¢â‚¬â€œ because the point is vague, Ã¢â‚¬Å“Liberation theology was a fuse of Christianity and Marxism and was used to radically change societyÃ¢â‚¬Â. How was it used to radically change society? They should mention that priests educated peasants in order to help them get out of rural poverty in Latin America in the 1960s.
The candidate makes good use of contemporary issues/examples in relation to how religion has been a radical force for change, such as Ã¢â‚¬Å“Another example of fundamentalism promoting social change would be that of mainly Islamic groups. The September 11th attacks can be explained in terms of social and economic changeÃ¢â‚¬Â. This is in addition to historical social change, for instance WeberÃ¢â‚¬â„¢s theory that Calvinism was a major influence in the creation of a new society, capitalism.
Sociological key terms, Ã¢â‚¬Å“Liberation theologyÃ¢â‚¬Â and Ã¢â‚¬Å“religious pluralismÃ¢â‚¬Â are mentioned, which is very good, because, in my experience, most candidates have a tendency to not bother with the terms that sound complicated. But the writer will be credited for weaving these so well into their essay.

There are a fair few grammatical issues in this essay. There are random capital letters in the middle of sentences, Ã¢â‚¬Å“IndustrialisationÃ¢â‚¬Â and the wrong word is sometimes used, Ã¢â‚¬Å“off courseÃ¢â‚¬Â instead of Ã¢â‚¬Å“of courseÃ¢â‚¬Â. It also mentions Ã¢â‚¬Å“terroristÃ¢â‚¬â„¢s attacksÃ¢â‚¬Â when it should simply be Ã¢â‚¬Å“terrorist attacksÃ¢â‚¬Â. On the whole though spelling is good, although I did notice the writer abbreviated Ã¢â‚¬Å“SeptemberÃ¢â‚¬Â to Ã¢â‚¬Å“SeptÃ¢â‚¬Â which I think gives a bit of an informal (and perhaps lazy) impression. If this issues were corrected I think a slightly higher mark would be reflected.