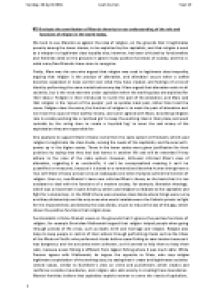 Evaluate the contribution of Marxist theories to our understanding of the role and functions of religion in the world today.

﻿Sunday, 20 April 2014 Liam Curran Year 13 1. Evaluate the contribution of Marxist theories to our understanding of the role and functions of religion in the world today. We tend to see Marxists as against the idea of religion, on the grounds that it legitimates poverty among the lower classes, to be exploited by the capitalists, and that religion is used as a weapon to legitimate class equality also, however, has been criticised by functionalists and feminists alike on the grounds it ignore many positive functions of society, and this is what many Neo-Marxists have come to recognise. Firstly, Marx was the one who argued that religion was used to legitimate class inequality, arguing that religion is the product of alienation, and alienation occurs when a crafter becomes separated or loses control over what they have created, and feelings of a loss of identity performing the same menial tasks every day. ...read more.

However, Althusser criticised Marx?s view of alienation, regarding it as unscientific, it can?t be conceptualised meaning it can?t be quantified or measured, because it is based on a romanticised idea that human beings have a true self. Marx?s theory proves to be an inadequate one when trying to outline the function of religion. Even so, neo-Marxist?s have now criticised Marx?s theory on the basis that it is too outdated to deal with the functions of a modern society, for example, liberation theology, which was a movement in Latin America, which used religion to retaliate to the capitalists and fight for a democracy. In the 1960?s there was a massive class divide where things were run by a military dictatorship and the only ones who would retaliate were the Catholic priests to fight for the impoverished, and destroy the class divide, or just to reduce the size of the gap, which shows the positive functions that religion does. ...read more.

women are exploited through religion and serves to keep women subservient to men who are generally higher in society, and this can be demonstrated by the fact that women in Islamic religion have to wear the hijab before going outside anywhere, and is a sign of property, however, Woodhead interviewed a small sample of Islamic women who said they felt liberated by the fact of wearing a hijab because it represents their freedom, so religion to some can make them feel free and liberated from the oppression, and another criticism of Marxist feminists is that they ignore where religion serves to help women, for example while women priests aren?t allowed in the more orthodox religions, they are allowed in evangelical groups which shows that women can participate in the more important aspects of religious organisations. Overall, I would argue that while religion was used to oppress people, it now serves to liberate people from social injustice due to less strict doctrines from the world?s traditional religions, through the influence of evangelical groups. ...read more.