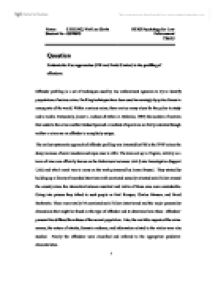 Evaluate the Two approaches (FBI and David Canter) to the profiling of offenders.

Question Evaluate the Two approaches (FBI and David Canter) to the profiling of offenders. Offender profiling is a set of techniques used by law enforcement agencies to try to identify perpetrators of serious crime. Profiling techniques have been used increasingly by police forces in many parts of the world. Within a serious crime, there are too many clues for the police to study and to tackle. Fortunately, (Janet L. Jackson & Debra A. Bekerian, 1997) the number of motives that underlie the crime and the Modus Operandi or method of operation are fairly restricted though neither a crime nor an offender is completely unique. The earliest systematic approach of offender profiling was invented by FBI in the 1970's since the sharp increase of serial murders and rapes case in USA. The team set up in Virginia, initially as a team of nine was officially known as the Behavioural sciences Unit (Later Investigation Support Unit) and who's remit was to carry on the work pioneered by James Brussel. They started by building up a library of recorded interviews with convicted sexually-oriented serial killers around the country since the interaction between assailant and victim of those case were considerable. ...read more.

Canter's approach to profiling owes more to psychology than that of the FBI. He (Canter) describes the FBI type of profiling as "...more of an art than a science..." (Canter 1995). Canter further suggests that criminals, like all people act in a consistent way. And, that all actions are linked no matter the setting, and therefore an analysis of their behaviour can offer clues as to their lifestyle during a non-offending period, thus aiding possible detection. It is argued that people live in a social context and therefore there would be an implicit relationship between offender and victim, which could also help to offer clues to the offender's life. Examination of any surviving witnesses' testimony and statements can reveal clues in such things as speech patterns, interests, obsessions and ways of behaving which may carry into their normal, non-offending life. For example a rapist might treat his victim with some care and may be apologetic after the offence, this might be how he treats other women who he has regular contact with, in his social environment. Canter's methods are different from those seen in such films as Silence of the lambs, and he suggests that interviews with this type of manipulative killer is not likely to be helpful. ...read more.

Furthermore, it can ascertain whether a series of offences is likely to have been carried out by the same individual. Offender profiling is also extremely important when there's little idea where they should start looking for an offender. However, many of police officers still misunderstand profiling is what fictional profiler can do as in the movies. Actually, profiling cannot state whether one particular person did or did not commit the crime under investigation. Most courts do not currently accept 'expert' evidence from profilers( Gudjonsson and Haward, 1998: 173). If profiling is to become accurate enough and an accepted 'science' it will be necessary for those working in the field to use an approach that mirrors those used in the natural and the social sciences. Then, offender profiling would be the most important part in investigating crime case. Reference Ainsworth P.B. (2002). Psychology and Policing. Cullomption/U.K.: Willan Publishing, Chapter 9 Jackson, J L and Bekerian, D A (eds) (1997) 'Does offender profiling have a role to play?' in Offender Profiling: theory, research and practice, Chichester: Wiley, 1-7 The Open University of Hong Kong. (2001). Unit 10: 'Analyzing crime patterns and profiling offenders' in PS203 Psychology for Law Enforcement, Hong Kong: OUHK Name: CHEUNG, Wai Lun Gavin Student No.: 03528623 PS 203 Psychology for Law Enforcement TMA5 1 ...read more.